One of the unit Origami creatures I have created takes on the characteristics of an actual snake. It even has an articulated body with scales. Whenever I have taught classes of kids Origami and offered them an opportunity to select their favorite fold from a wide selection, they usually choose these.

Begin with a Pinwheel Base:

To begin your snake you will need to fold several body segments using the Pinwheel base as a starting place.

Next you will need to raise each of the four points of the Pinwheel up like a shark fin. Push down on the tops so they look like the picture above. Then you turn the fold over and fold the four corners to the center while letting the flaps from the underside pop out. It looks like this:

If you turn it over the underside should look like this:

You can make as many of these as you like, the more you make the longer the snake.

Add just a tiny drop of glue between the units to hold them in their tucked position. Keep adding body units until you reach you desired length. 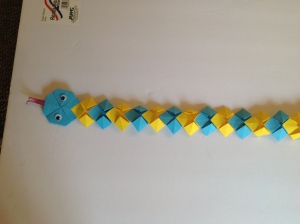 Heads or Tails or Both?

Now we need a head and a tail. To make a head choose a square of paper slightly larger than your body units. You will fold it in the same way as the body units and then add three more folds to shape the cheeks and nose. 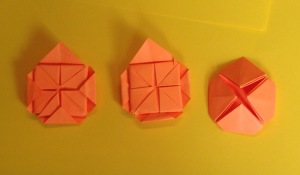 The tail is the easiest part (unless you want to make a rattlesnake). Start with a rectangle as wide as the squares of paper you used to make your body units. Fold an airplane point on one end. On the same end, fold two more airplane points on top of the one you already made. This will make the tail long an slender. On the opposite end fold a single airplane point to make the flap that attaches to the body of the snake. Again, a small drop of glue will keep it attached. 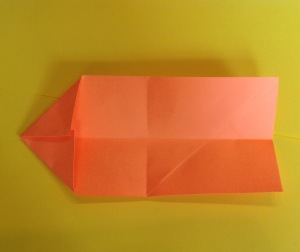 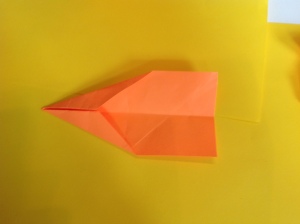 If You Want to Make a Rattlesnake You will have to look at my blog on the Hexoflexagram. The rattle is just an unglued segment of the flexograms.

Here Is a Finished Rattlesnake: 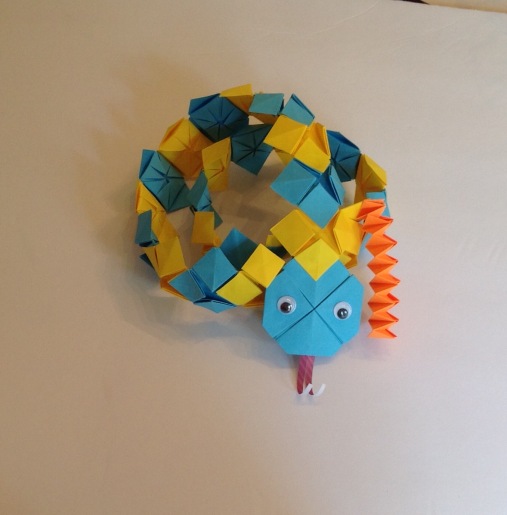 Here Are Some More Snakes

Add a Tongue and Eyes:

You can create a tongue with a small thin triangle of red paper. Slit it down the middle and curl the sharp end. Glue into the slot under the snake’s nose. You can either add eyes with a felt tip pen or cut out pieces of paper to form the eyes. You can also add “wiggle eyes” that you get from the craft store.

Snakes Are Often Feared But They Get a Bad Wrap!

It’s interesting to see people’s responses to snakes. Though these paper ones are less fearful, the real ones are often greatly feared. If you know the first mention of the snake in the Bible you get a little insight into this response. It’s interesting to see that mankind is responsible for the fearful aspects of this creature. Before the fall of man into sin the creatures were considered just another part if God’s wonderful creation. It was the result of Satan’s possession of the snake and man’s disobedience to God’s command that the snake, as well as all creation, was cursed. I look forward to the day when God removes the curse in the new creation. In the meantime, we can still enjoy observing and learning more about these beautiful creatures.

Wrap Your Paper Snake Around Your Neck or Arm:

Since the body naturally curls it will easily wrap around your neck or arm. Share your creation with others.

Modify to Get What You Want:

One of the exciting things about Origami is that you can take an existing form and improve it. Several variations are possible. 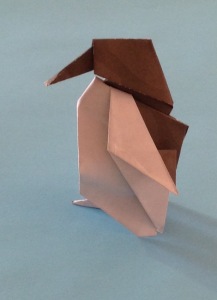 The original penguin fold I learned several years ago was pretty basic and it was a flat 2-D model. It worked well for flat surfaces like greeting cards. I desired to create a 3-D form that could be placed on a flat surface to mimic a penguin standing on ice. It took several attempts to arrive at a model that seemed to represent a more realistic penguin model.

Here was one of my first attempts. I made a smaller one and inserted it into the larger one to imitate an adult caring for its young.

Here was another model.

This model has a rounded belly. 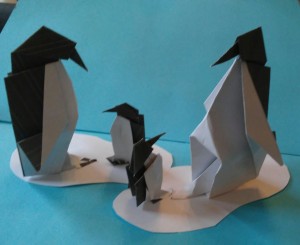 If you take a piece of white paper and cut an irregular shape, you can create a base. You can also make the base 3-D by placing rectangles on each edge and folding them down. You can also use a sheet of plastic foam or styrofoam for your icebergs.

When mounted on a sheet of paper, these make great party favors or centerpieces for the table. You could also put names on them to indicate seating arrangements. I suppose you can think of many more ways to use them.

Do You Want To Fold One?

Start with a square of two-sided paper: black and white. Put the white side up to begin.

Next , fold a crease down the middle with the paper in the diamond position.

Now, fold an air-plane point on the top meeting in the middle. 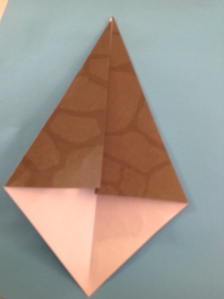 Think of a Teepee for the next fold. Fold up the two sides of the black so it looks like an open door on a teepee.

Then fold the paper like this to the corner points on each side: 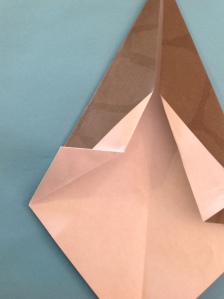 Next, pop fold the top part under the back like this: 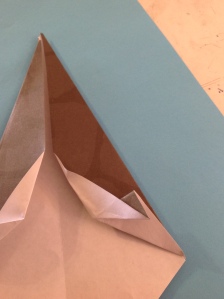 Repeat on the other side wing.

Turn the paper over to the black backside. 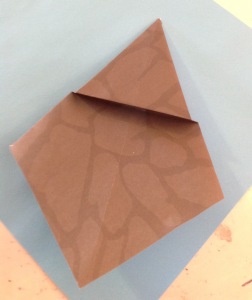 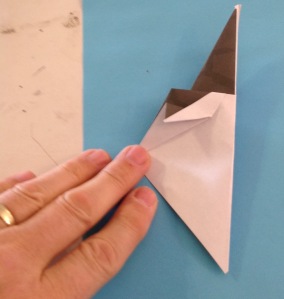 Pinch the head and pull back. Then squeeze the paper to hold the shape. 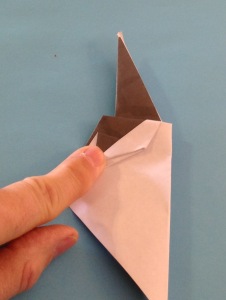 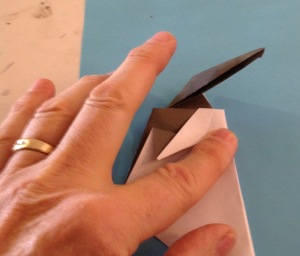 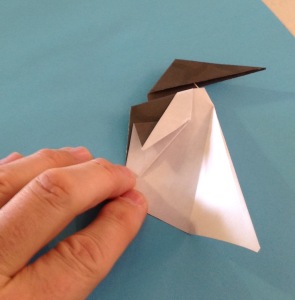 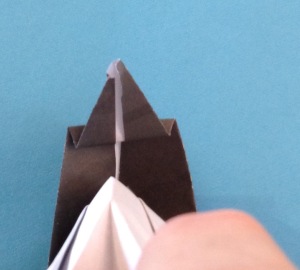 Lay the  bird on its side. Next, fold the tail end diagonally up to shape the belly pocket:

Pop fold it in:

Now, let’s open the belly pocket: put one finger in front to open the pocket. Put another finger in the back to push forward widening the body and forming the belly bulge: 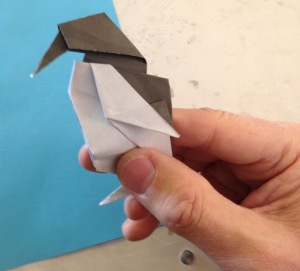 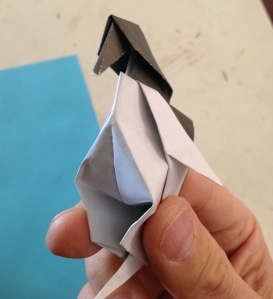 Put a dab of glue on your iceburge and place the penguin where you want it.

These amazing creatures like to live in large colonies. God gave them the ability to live in places other creatures would freeze. This allows them to raise their young with few predators to bother them. The fathers incubate the eggs and raise the young while the mothers are out to sea gathering food. Soon the mothers return to assume the responsibility of raising the young allowing the fathers to return to sea to eat after such a long time of going without eating.

Learn More About These Amazing Birds:

I am always amazed at the great design of our Creator, God, Who gave each creature the ability to reproduce after its own kind and survive in unique places. Each creature is a testimony of His greatness. Why not read the story of Creation in the Book of Genesis in your Bible. You can also learn much more about the various types of penguins by doing research on the internet or reading books about them from the library.