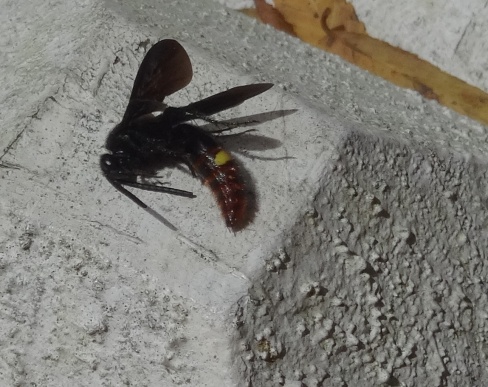 Should I Be Afraid?

In  a couple of my earlier posts I shared with you my encounters with aggressive Hornets. Those were frightening experiences. Though some wasps and hornets can be aggressive there are exceptions to the rule. The Blue-Winged Digger Wasp is such an example. Even though they can sting, and will, if attacked, they rarely show any aggression towards humans.

Blue-Winged wasps are very helpful to have in your garden. No matter what you are growing the plants need to be pollinated. Wasps and other insects help when they come in to gather nectar from the flowers. At the same time they pick up the pollen and carry it on the tiny hairs on their bodies to the next flower they visit. In this way the important pollen is placed where it is needed to insure a future generation of the plant that provided the pollen grains.

If you happen to like roses and hibiscus and other flowers you should be glad to have some Blue-Winged Wasps around. They specialize in preying upon one of the gardener’s worst enemies, the Japanese Beetle. These destructive beetles eat the foliage and flowers of flowering plants often killing them or making them less attractive by tearing them apart in their feeding frenzy. 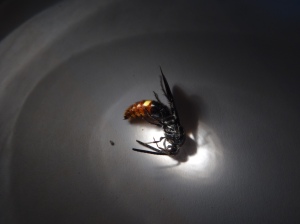 How Do They Do It?: (Why are they also known as Digger Wasps?)

When an adult female Blue-Winged Wasp is ready to have babies she drops to the ground and starts looking for a beetle grub buried under the ground. When she detects its presence she digs into the ground and stings the grub. This paralyzes the grub and immobilizes it for transfer. The wasp then digs another hole, lays and egg on the grub, and reburies it. Several months later, the baby wasp larva emerges and finds itself in contact with its first meal, a fresh beetle larva. The sting of the wasp also acts as a preservative keeping the larva in stasis until needed for food. Obviously, the baby beetle larva never grows up to eat flowers but helps in propagating a new generation of Blue-Winged Wasps.

All of the following pictures are of the same two wasps. See how differently they look as the lighting is shifted from different angles. As the wasps move about in the wild their colors will change as the light hits them in different positions. As you probably know, color plays an important part in announcing to other creatures danger and other information. Iridescence, ” the ability to gradually change color according to the angle of view” , is a very good way for animals to recognize each other and avoid danger from other creatures. The yellow spots and black and yellow and orange colors are also important indicators of danger, especially when in striped configurations. 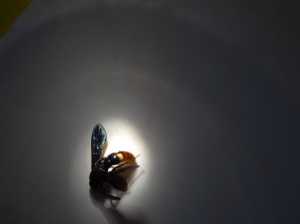 Notice the orange abdomen and the yellow spots.

See how blue they appear when the light comes in from a different angle. 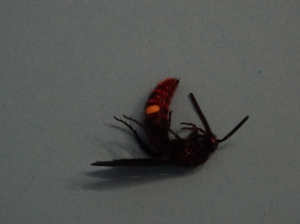 Many of the colors of these insects are invisible to the human eye but very apparent in the ultra violet and infrared bands of the spectrum. Many animals, especially insects, have keen perception in these frequencies of light. But, of the colors we can see, we can distinguish this wasp from many others.

These beautiful wasps have the scientific Name Scolia dubai. They are found as far north as New England and south all the way to Florida. Headed west they can be found as far as the Rocky Mountains. Though solitary they can be seen congregating in large numbers at food sources like wild mint and other nectar producing flowers. 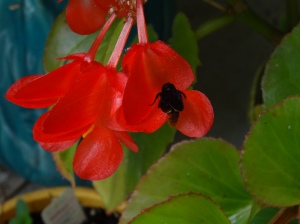 One of the interesting things about these solitary wasps is their night behavior. They spend their nights resting on plants. The males even like to curl up around a stalk of grass or a twig. As they sleep water droplets often form on their bodies as the moisture in the air condenses on to the cooler surface of the wasp’s body. This moisture can then be slurped up and it also helps cool the body.

Every Creature Has A Purpose:

Whenever I discover a new species of plant, animal, or a creature from other Kingdom, I am reminded of the vastness of God’s Creation. There are so many things to discover that show us the magnitude of God’s creative character. Each time you take a closer look, you will discover that every single creature God created has a significant purpose in the overall creation. Each has a different job to do which benefits the whole. We, as humans, often refer to creatures like insects as “good bugs” or “bad bugs“. Though this designation may help us avoid getting stung or bitten or seeing our gardens destroyed, it doesn’t reveal the whole picture. Remember, “The heavens declare the glory of God, and the skies proclaim the work of His hands. Day after day they pour forth speech; night after night they reveal knowledge.” Psalm 119: 1-6.  Be sure you take time to listen and observe His greatness. You can gain a lot of knowledge and come to understand more about our Wonderful Creator.