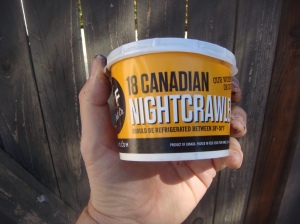 What was your first experience with worms? Was it putting a worm on a fishhook or watching your dad do it for you? Was it while digging in the garden area to plant some seeds? Was it right after a rain storm when the worms went crawling across the sidewalk? Where ever it was it was probably a memorable experience. Yet after that first time we often take the lowly worms for granted. Just how important are these little creatures to our well being and that of the environment? Let’s take a closer look and see what we can learn. 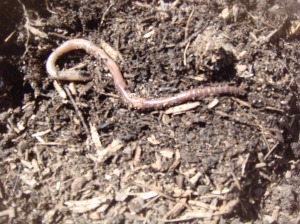 When looking for examples of waste management, you don’t have to look farther than the ground. There, with a few scoops of a shovel, you will probably find the lowly earthworms, God’s recycle agents.

Earthworms are so important to the environment, yet go mostly unseen by those who enjoy the benefits of their work. This is most likely due to the fact that they do most of their work at night while we are sleeping. They don’t call them “Night Crawlers” for nothing! Did you know that the earthworms, in just a single acre of land, can turn over as much as 90 metric tons (one hundred tons) of soil in a single year? Wow! That’s an earth-moving fact! If worms did not do this, we would be buried in tons of dead and decaying plant material. The soil would not be able to provide the necessary nutrients for our crops, animals would go without food. But that;s not all! 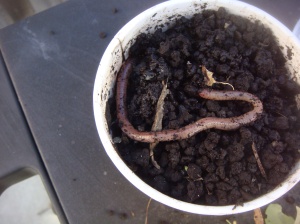 Did you know that if the earthworms did not loosen the soil and break it up and drill it with tunnels, the water from rainstorms would quickly just run over the soil and not be able to enter the ground. If this happened, just think how much fast- moving water would cause erosion and damage. We would not have adequate water when we needed it in the summer because it would have all evaporated or run down to the sea.

Earthworms are responsible for replenishing the top soil. They actually eat the dirt as they tunnel. They can eat up to twice their body weight per day. Since they have no teeth to chew up what comes into their mouths, they must have another way to process the bigger pieces. Do you know what it is?

In order to process the food, worms use their gizzards. Yes, earthworms, like ducks and other birds, have gizzards. The gizzard is found just behind a part of their digestive tract known as the “crop”. The crop acts a lot like our stomachs. It holds the food until it is ready to be further broken down. The gizzard contains small pieces of rock which are harder than the soil being processed. As the muscle walls of the gizzard move in and out the rocks break up the soil, releasing nutrients and making it easier for the soil to pass through the rest of the worm’s body. The soil is loosened and injected with one of the best fertilizers known to man, worm castings. If you look around the top of the wormhole you can see the little ring of lighter colored dirt. These are the worm castings. You can actually buy worm castings at the gardening center to improve your soil.

In what other ways do worms help you? Well, you all know where most people experience their first worm in hand…..or Daddy’s hand……Fishing! Yes, worms make up a large part of the fishing industry. They are pretty effective in catching fish. What does that tell you? Fish and many other animals depend on worms for their food. When worms are washed out into the river, pond, or stream during a storm they do not go to waste. They are eaten. What other animals have you seen eating worms? Yes, birds!

Just watch a robin in the Spring for a few minutes and you will probably see her pull up a large, juicy worm for her breakfast or to feed her young. Many other creatures, including man, eat worms.

Some live in some of the coldest regions of the earth like Siberia and some of the islands near Antarctica.

Some worms in Australia grow up to 12 ft. long and weigh up to one and a half pounds.

Though worms are captured by other animals, they are not completely defenseless. Earthworms are equipped with some amazing grippers. These little bristles are found on the back end of the worm. They are like tiny anchors gripping to the sides of the holes in which the worm is hiding. At night, when they come out of their holes to grab leaves and other food items, they keep their back ends in the ground. They are very sensitive to vibrations and quickly pull down in their holes if you approach them with heavy feet. However, if you sneak up quietly, you can reach down and grab the worm and try to pull it out before it notices. It, however, will probably grab unto the dirt in the bottom of the hole and hold on for dear life. If you pull too hard you will only get the front end of the worm. If your want to get the whole worm, you have to be smarter than a worm. To do this you hold on to the worm and squeeze the little ring around its head end. This usually causes the worm to release its bristles and you can slowly pull it out of the ground. Some worms even have offensive weapons to use against their attackers. Some contain chemicals that taste bad or are irritating to the linings of the mouths of their enemies. If bitten, the worm excretes these fluids and the attacker releases it.

DON’T USE WORMS AS A WEAPON!

Though worms can be very useful in their proper places they can also cause problems when released in places where they are not native. Mankind has often messed up this balance by moving one kind of worm to a different location where it does not naturally belong. This causes a great deal of change in the food chains and soil chemistry of the area. It is important to remember not to release the worms you get at the bait shop back into the soil when you are fishing with them (unless you dug them yourself in that area.) They may be a totally foreign species to your area and can displace the native populations or be a flavor of worm that the animals in your area cannot digest. You can, however, take the remaining worms and raise them in a box of soil and start your own bait source for future fishing trips.

WORMS IN THE KITCHEN?

One pound of worms can recycle up to 2 lbs. of waste in one week. They eat newspaper, banana peels, apple cores, the parts of fruits and veggies we throw away, cardboard boxes, egg shells, and many other organic substances. They turn it into compost which can then be used in gardening both in and out of doors. The worms will also reproduce and create more worms to use or sell.

Did you know that one pound of red-worms can cost from $20 to $40? That’s money in the bank unless you are buying them. You could quickly regain your investment from the materials they produce: compost and worm- castings, which can be sold to gardeners or used in your own vegetable garden. You can also get a lot of new worms to make new composting bins or for fishing.

Take a flashlight and go out late at night to see if you can catch the night crawlers out of their holes on your lawn. It seems to work best when the lawn is moist after watering in the day or a rainstorm. Sneak up slowly or they will dive back into their holes in the grass. They are gathering leaves and grass scraps to take back underground to digest. Look around your yard in the day time to see the worm-casting rings around their holes. This will help you find them when it gets dark.

Earthworms are “Hermaphrodites”: They are both female and male at the same time.

Worms have no eyes.

Earthworms lay eggs called “cocoons” from which the babies emerge.

The bristles on the Earthworm are called “Setae”.

There can be over one million worms in one acre of land.

The ring around the collar of the Earthworm is called the “Clitellum”.

TAKE THIS QUIZ TO SEE HOW MUCH YOU HAVE LEARNED: