One night while fishing for catfish, out on the end of the pier, I was startled by a huge bird landing right next to me. Not only was I startled, but the bird gave out a loud squawk when it realized it was not alone. The bird rustled its wings and gave flight rising like a large Pteradactyl. It flew just a short distance away and landed near the shore about 100 feet away. Throughout the night we both kept an eye on one another. Though I caught larger fish he was content to spear the shiner minnows swimming near the surface in the moonlight. He also caught a larger bluegill when it wandered too close chasing the shiners.The heron is a very patient fisherman. He stood in the shallow water on his long stilt-like legs. He kept his long neck in an S shape. By doing this he had a springlike reaction when he jabbed his spear, his long beak, into the water. Once he caught a fish he would often squeeze it several times in its beak while flipping it up to a point where it could swallow it.

These pictures were taken at my son’s house in Texas. He really captured the colors of these majestic birds well. 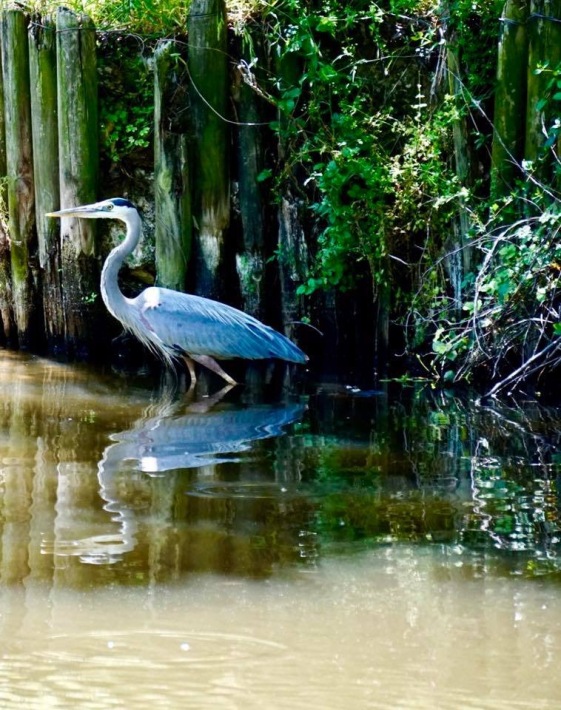 I once lived on a ranch in Northern California near Clearlake. On the ranch we had two small ponds full of fish. The pond on the front of the property had hundreds of small catfish in it. I observed that the herons there were specialist in removing the organs from inside the fish. They left the rest of the spiny small fish on the shore for other creatures to feed on. I have never seen this behavior anywhere else. Usually they eat the whole fish in one big gulp.

Did you know these birds are about 4 feet high and have a wingspan of about 6 ft. They usually hunt alone by spreading out around the waterways where they feed. They do, however, enjoy nesting in large groups which adds extra protection by adding a lot of eyes to keep watch on potential threats to their eggs and young. Interestingly, the daddy herons gather the sticks for the nest building but leave the construction of the nest to the mother. The nests are huge and can be found in the tops of trees near the shore. Both parents help in feeding the young. The parents catch and eat fish and then regurgitate it for the babies so it is easier for them to digest. Doesn’t sound pleasant to me, but I’m not a heron. It takes a lot of feeding to raise the young. There are usually around five or six of them in the group. Many enemies can snatch the young if the parents aren’t watchful. These include: crows, ravens, raccoons, hawks, eagles, bears and snakes. The parents take their responsibility to care for the young seriously. The males spend about 10 and a half hours on the nest while the eggs are incubating. The females spend the rest of the time. Once hatched a parent is usually nearby while the other parent is hunting food.

Interestingly, fish is not the only thing on the menu. They also eat small rodents like mice, gophers and voles, frogs, snakes, insects, baby turtles, as well as other smaller birds.

After about 80 days the young are ready to leave the nest to fend for themselves.

The scientific name of the Great Blue Heron is Arden  herodias.

Heron Catching and Eating a Catfish: 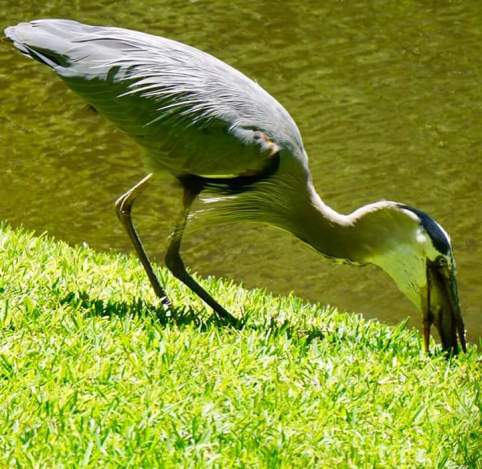 I can’t help but be amazed at how much care God put into designing these birds and giving them the ability to catch their own food and build huge nests out of sticks. He provided everything they would need to survive and help maintain the balance of the ecosystems where they live. If He cares for them, He surely is able to care for us. 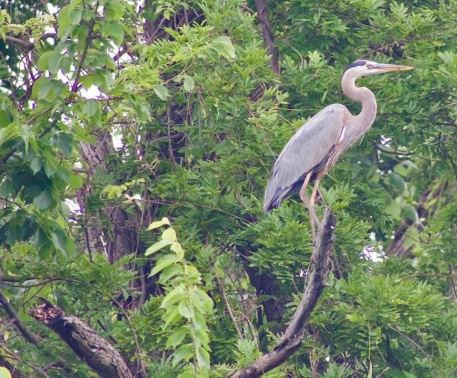 Another near relative of the Great Blue Heron is the Little Blue Heron. It has a more purplish hue and more vivid light blue on its face. Below are a couple pictures of these birds capture in pictures at the same place as the Big Blue above. Notice the Bull Frog that the bird is eyeing. He better watch out or he will become lunch! 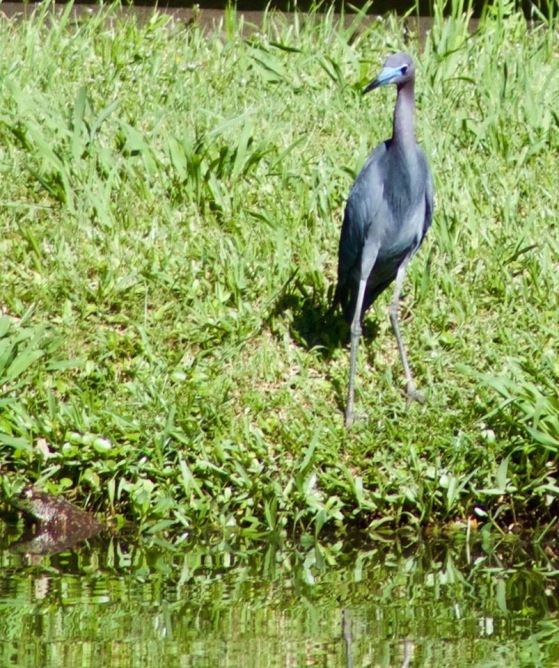 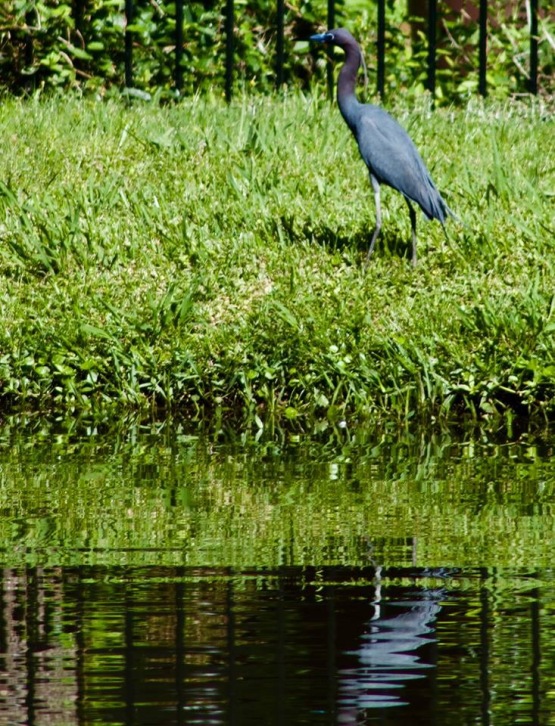 If you want to learn more about herons, you can do research by reading about them. More fun, however, is to spend some time out watching them for a few hours. Take a pair of good binoculars and you can see a lot more of the action. Be prepared, however, to wait patiently. Why not take a fishing pole along and do some fishing while you wait. See if you can out-fish the amazing herons.