Have you you ever seen a duck like these? I had not until my son sent me some pictures of these strange birds. Apparently you have to be in the Southern- most part of the United States to see them. These ducks were photographed in Texas feeding in the lawn next to a lake. They often go unseen in the areas where they live because they do most of their feeding at night. You will probably hear them before you see them, however. They are very loud. Don’t expect to hear quacking! They aren’t called “Whistling Ducks” for nothing. These are Black-Bellied Whistling Ducks. They are more similar to the swans in behavior than the ducks you and I are most familiar. So how are they different?

Black-Bellied Whistling ducks spend more time on the ground than in the water. They also are monogamous: they mate for life with just one partner. They, in addition, are difficult to tell  apart by gender since both the females and the males look alike, which is quite different than other ducks. They usually nest in trees or other high structures that offer cavities for the eggs to be placed. If you look at them closely you will notice they have much longer legs than other ducks. These ducks usually stay in the same areas throughout the year. Though they might move around within that space, they really don’t migrate.

Some other interesting things about these ducks is how they often practice “egg dumping“. What does that mean? The females occasionally  sneak into another Whistling Duck’s nesting area and dump the eggs already there and replace them with their own eggs. I guess this is a sneaky way out of having to feed the ducklings when they arrive. These ducks eat mostly plant material being primarily Herbivores. They often augment their diets with a little protein by consuming small aquatic insects, snails and spiders. They also may raid a farmer’s field to feed on rice and corn though usually this is after the primary harvest where they are actually serving as clean up duty for the remaining grain.

Black-Bellied Whistling Ducks have a number of natural enemies.These include animals that feed on their eggs like: raccoons, skunks, rat snakes, and bull snakes. Other animals prey on the baby ducklings including: Bass, catfish, gar, and even fire-ants. The adults are occasionally snatched up by great-horned owls.

These ducks are very colorful. Note their pink beaks, gray heads, black legs and chocolate brown wings. If you watch them in flight you will notice they have white wing patches which are mostly out of sight when on the ground.

So…if you are in Texas and if you hear a loud “Waa-Choo” whistling sound, you might find these ducks nearby. I can’t wait to return to my son’s house to observe them first-hand!

Here you see a pair sharing the shore with a Great Egret. 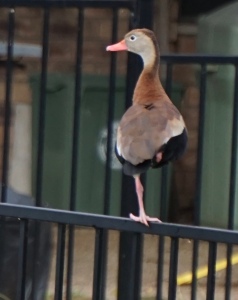 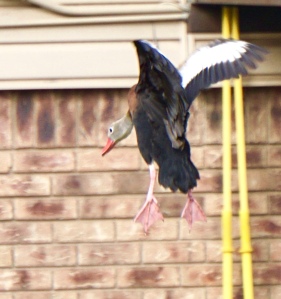 All of the above pictures were taken by Calvin Gluck in his yard inTexas. Thank you, Calvin.

Below are a couple pictures taken at the same lake by a neighbor of Calvin, Jamie. Thanks for letting me include them in my blog. 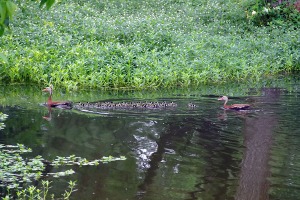