One of my favorite varieties of origami is Unit Origami. In this art form you combine several modular pieces to create a larger form. Using the same base you can make several different models. Here are a few of the forms I made with the same base unit. You can also make larger and smaller objects by varying the size of the squares of paper you begin folding. By adding dots made with a hold punch you can add color and texture to your piece. There are several ways to modify the designs by changing the colors of the dots as well as the placement. One of the reasons I like this unit is that it requires no glue to hold the original form together. I did use glue to attach the dots. 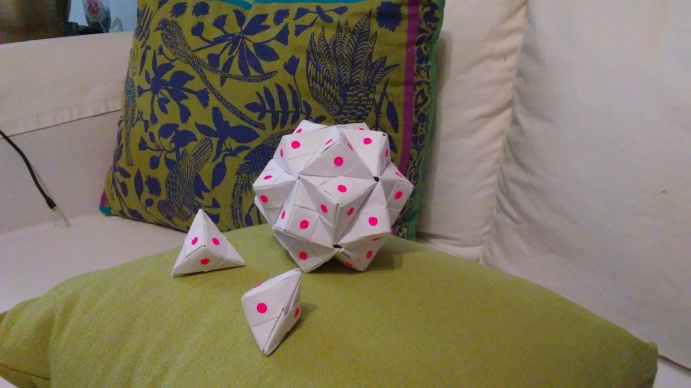 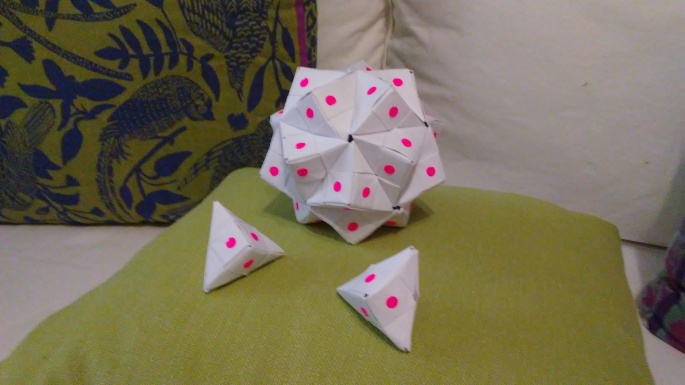 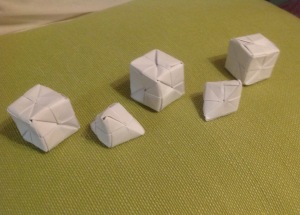 If you add spots, you can make your own set of dice. 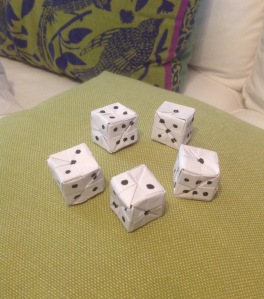 What Can You Make With 12 Units?

Here is a geometric form composed of 12 units. It is about the size of a baseball if you make it with squares that are created by quartering a sheet of copy paper. Of course, you will have a small strip of paper left over after folding the paper in quarters and folding it diagonally to make squares. Did you notice that the dice above were made with smaller units than the globes? These were made with squares cut from the strips leftover from the globe construction.

One of My Favorite Origami Books

There are actually more than one way to create the units used in these forms. The units I used in all the previous projects are a variation of one I found in Steve and Magumi Biddle’s book, Essential Origami.   You can find the directions for folding the units on pages 173-176 of their book. To make an easier unit, but with less color, just roll the paper to the center twice instead of going beyond the center and reverse rolling. Below you can see a cube made with the Biddle units and an example of the units used to compose the cube next to a modified unit of the same size.

Below is a picture of one of my favorite origami books.

How Would You Use Them?

By experimenting with this unit you can find others ways to combine them. They can be used in a wide variety of ways including: making your own indoor baseballs to play catch, using several combined forms to create mobiles, using forms as knick-knacks and conversation pieces, making your own playing dice for game play, and more. Fill one of the small cubes with beans or rice and you have a Hackensack, You can also use the small globes as Christmas tree decorations. How could you use them?