This picture and question came my way this week via Facebook. I recognized it immediately! These little guys have caused me grief on more than one occasion in the past. So, what are they and what do they do? Let’s take a closer look.

What’s In A Name?

This creature is the larva of the dermestid beetle. The adult beetle has many common names: Skin Beetle, Skeletonizing Beetle, Carpet Beetle, Larder Beetle, and Khapra Beetle. No matter what you call them, they are usually a cause for a response.

If you are an insect collector, you will only want this creature in your collection if it is dead; otherwise it will eat up your entire collection! How do I know? I’ve had a few collections devastated by these remarkably hungry creatures. Most of the time collectors of insects include a tiny bit of protective poison inside their collections to deter these invaders. I used to take a mothball and heat a straight pin and insert it into the mothball so I could then place the pin inside the box to emit fumes that kept the little beasts away. After awhile, however, the mothball would run out as it kept shrinking in size when exposed to the air. By that time I had almost completely forgotten about its insertion into the box. Once the fumes stopped the beetle larvae soon smelled the dead bugs and made their way into the box. They can enter even through tiny holes and gaps in the box. I came back later to show off my bugs only to find a box full of powder and broken body parts. As you can guess, insect collectors are not fond of dermestid beetles!

Some See Them As Helpers:

Did you know some people even pay good money for a container of these insects? That’s right! They have found a way to use them to help them clean skeletons so they can be displayed in museums. When used this way they are called skeletonizing beetles. Just put the dead animal’s skull in a plastic box full of these larvae, snap it shut,  put it in a dark place, and wait. Eventually you will find that the skull has been completely stripped of skin and flesh.

They Even Help Solve Crimes!

Forensic specialists have discovered that these beetles can be used to determine the time of death in murder victims. It seems that scientists have learned the amount of time after death when the beetles usually appear and this provides an important timing device.

As a fisherman who has tied up a lot of trout flies, I know these beetles also like to snack on the materials used to make these trout attractors. Most of us have a lot of feathers, fur, and animal hair in our tool box. Though these materials are great for tying on a hook, they also are a fine meal for demestid beetle larvae. If you find holes in your feathers or chewed up hair and fur you won’t have to look far for the reason. They also enjoy feeding on fur coats and feathered hair pieces.

Though you may not need to look far, you will need to look closely to find these little bandits. They like to hide in dark places and only come out to eat when it is dark.

Though these beetles can be destructive in many ways they actually have a very important ecological function! Can you imagine being buried under several feet of dead insects and seeing tons of dead, smelly animals all around you? That’s what would be the case if it were not for these little guys and other creatures that recycle dead things. Thank God that He created such natural recycle agents  and placed them in the environment to help sustain a comfortable living space.

I have only told you a little about these amazing creatures. You can discover much more by doing a little research. See if you can find out how many different species of these insects exist. How big can they be? How small? How do they vary in color? How long do they live? Why are they called “dermestid” beetles? That’s only a few of the things you can learn. Have fun learning more. 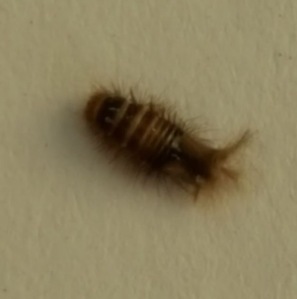 I’m a hairy little Beast. My favorite poem is:

Of course this was after I removed all his hair as he sat in the museum.

2 thoughts on “Hairy Little Monsters and Skeletons? What?!!”