What’s That Growing in My Garden?

I had an interesting experience this afternoon. As the weather has finally changed to Spring Time, I decided it was time to clear the weeds out of my garden. All was going well until I noticed some fur at the base of one of the large weeds I removed. All of a sudden the ground began to move and out popped the head of a tiny bunny rabbit. In fact, there were five little cottontails inside the shallow fur lined depression. I learned that these are called “forms” and are used as nest for baby rabbits in the Springtime. Apparently, cottontails don’t dig burrows in the ground for homes. Instead, some find old holes dug by skunks, squirrels, and other animals. Since the mother only feeds her baby cottontails twice a day, they choose the best time to avoid detection, morning and evening. The grass, weeds, brush, and other plants around the “forms” provide great concealment during the day.

Rabbits are very productive. They pump out babies in bunches of five or so, and just keep bringing new ones into the world. The number of individual babies an animal produces is usually directly related to their mortality rate. Since very few of the babies will ever reach maturity the mothers produce many litters every year during their short life spans. Dogs, coyotes, owls, snakes, foxes, cats, many birds of prey, raccoons, weasels, crows, man, and even squirrels attack baby rabbits and their parents. Cottontails are classified as a game animal and rules are established by the Department of Fish and Game for their protection. Farmers are allowed to kill them if they are causing agricultural problems.

I don’t mind sharing some of my vegetables with wildlife in my yard. I think it is interesting to observe the creatures that live in my area. In the hope that these little rabbits survive I pushed a little of the dirt around the form and replaced one of the weeds I pulled to partially cover the bunnies. I’m hoping the mother will come back and move them to a more secure place this evening.

Why the White Tails?

Scientists have studied animals with white tails to try to figure out their function. Most conclude it actually confuses prey animals chasing them as they dart to and fro in their bouncy escape. It’s sort of like a bull fighter waving a red flag.

Wow! That’s a Lot of Babies!

Each batch of babies is called a “kit”. A mother rabbit can produce up to seven kits a year. That potentially would be about 35 bunnies in all, however, most only produce about five kits. A lot depends in the environmental conditions, food, water, and rate of predation.

What’s Been Chewing On My Tree?

Sometimes these rabbits can develop a taste for the bark of certain trees and can cause damage or even death of the trees that they gnaw on. Many tree experts put metal or plastic guards around the bases of trees to prevent this kind of damage.

And In This Corner We Have The Lightweights

A fully developed Eastern Cottontail is about 15-19 inches long (38-49 cm). They can weigh from two to four pounds.

Cottontails can run a speeds of 18 mph for up to a half mile. They have to be fast to avoid capture. 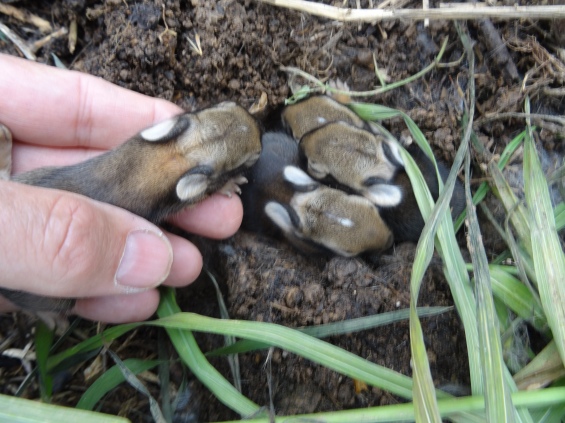 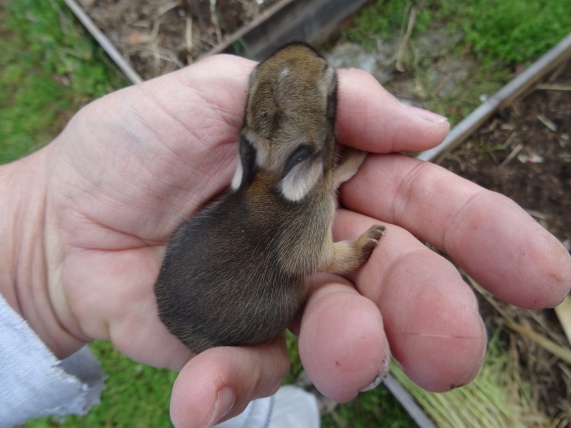 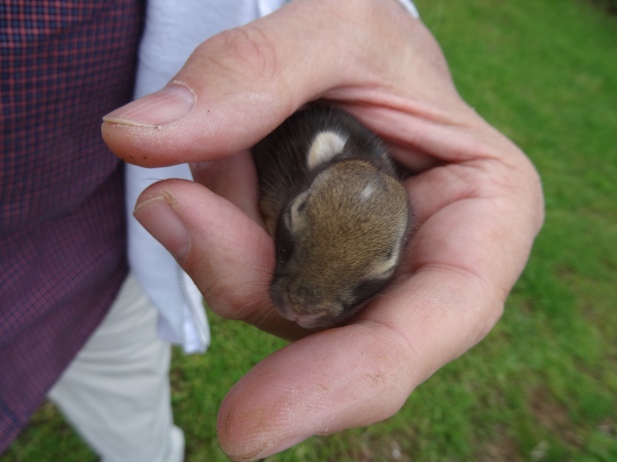 The pictures above are two days later. Notice the hair starting to form.

They have excellent ability to smell having about 100 million sensing receptors in their noses. (That compares to about 5-6 million in humans).

Rabbits have teeth that just keep growing. The grasses and other vegetation they feed on and their gnawing on tree trunks help keep their teeth trimmed. These unique teeth enable them to maintain healthy teeth for all their dietary needs.

Consider the Evidence for Design

As I observe these, and other creatures, I am called to consider how all this specialized design came to be. I personally believe it all points to a common Designer. How about you?

The picture below was taken on April 19, 2018. Note that one of the original bunnies died. He was the runt of the litter. The others seem to be doing well in spite of some really cold evenings and a couple down pours. 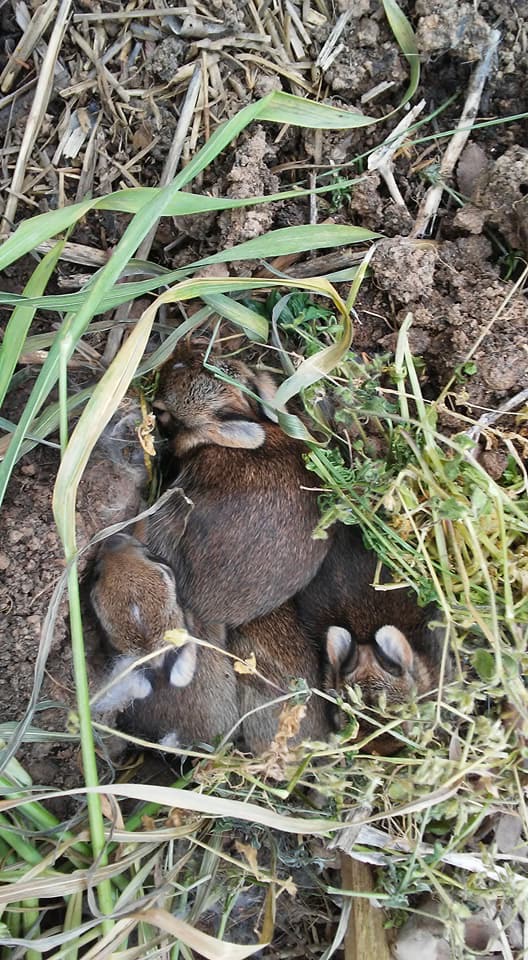 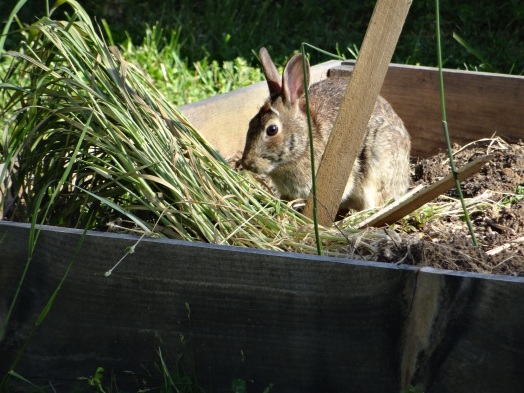 I finally caught the Mother with the babies in the morning.

Below are some more pictures a few days later: 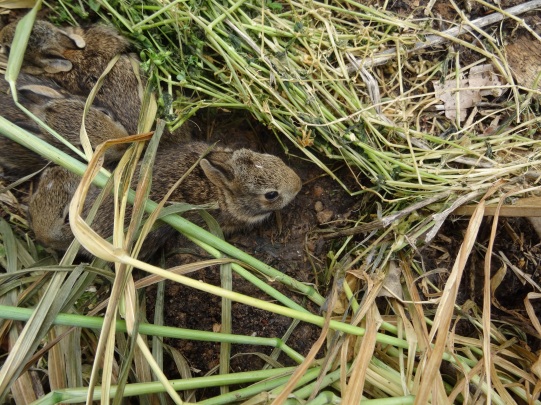 Notice that they are getting bolder. This one left the nest when I lifted the weeds from on top. He stayed close and went right back into the shelter once I stood back. Not long from now they will have to fend for themselves.

Below is a second bunch of babies discovered in my garden box in mid July. They are very good at blending in to the background. 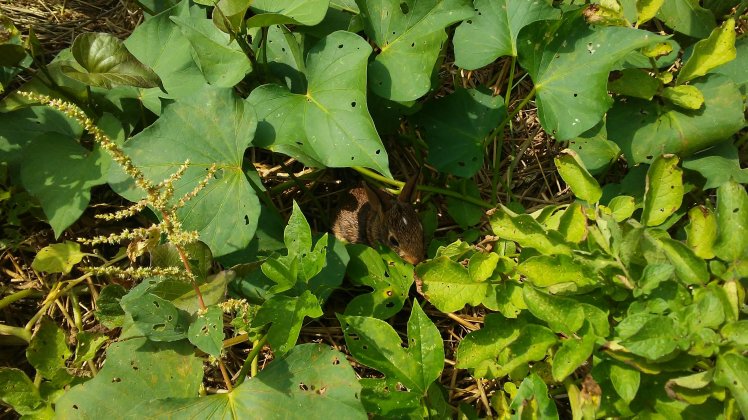 One thought on “Baby Cottontail Rabbits In My Garden”