It was early in the morning after spending the night in a hotel in Kremmerer, Wyoming. We got up and ate breakfast and then were off to go fishing. I had been looking forward to this day for many years. This was no ordinary fishing trip, however. Instead of poles and fishing lures and bait we were going to get our gear at the digging site. That’s right. We were going to dig for our fish.

We were given a hammer and a wide, razor sharp chisel and a rack to place our finds upon.

Hidden for Thousands or Millions of Years?

These fish were fossils that had been buried in the ground for a long time. We would be the first to let them see the light of day after spending so much time locked inside limestone. It’s interesting to consider the evidence for the various theories of the ages of these fossils. The Old Earth Creationists and the Uniformitarians (evolutionists) ascribe much older ages to the fossils believing that life has been on earth for such a long time in order for things to evolve into present-day life forms. Young Earth Creationists, like myself, believe the earth is much younger and that the majority of the fossils we find were formed during the Great Flood of Noah’s day and other catastrophic events. Anyway you look at these fossils you can clearly see that what ever placed them in the rock was sudden and catastrophic in nature, rather than slow gradual change. It’s interesting to note that most fossils are in sedimentary rock or metamorphic that was once sedimentary. Water was involved. Other types of catastrophic events include volcanism, which very likely accompanied the Flood when the water from below and above split the earth open. I found several blue streaks and rings in some of the stone we were splitting and asked what they were. I found out that they were composed of volcanic ash embedded in the rocks.

The picture below is one of the fossils on display in the Fossil Butte National Monument museum. It shows a large fish eating a smaller fish. Though rare, a number of these fossils have been found.

Below are my wife, Janet and my nephew, Caleb. As you can see, we were all smiles. 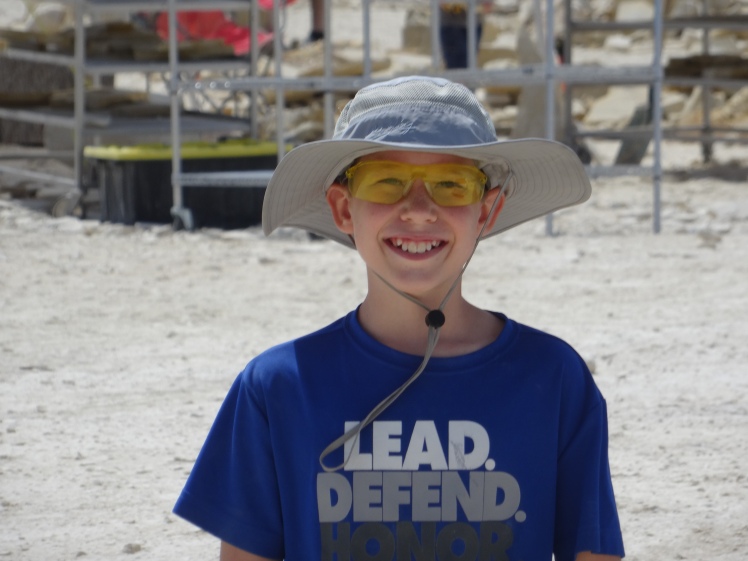 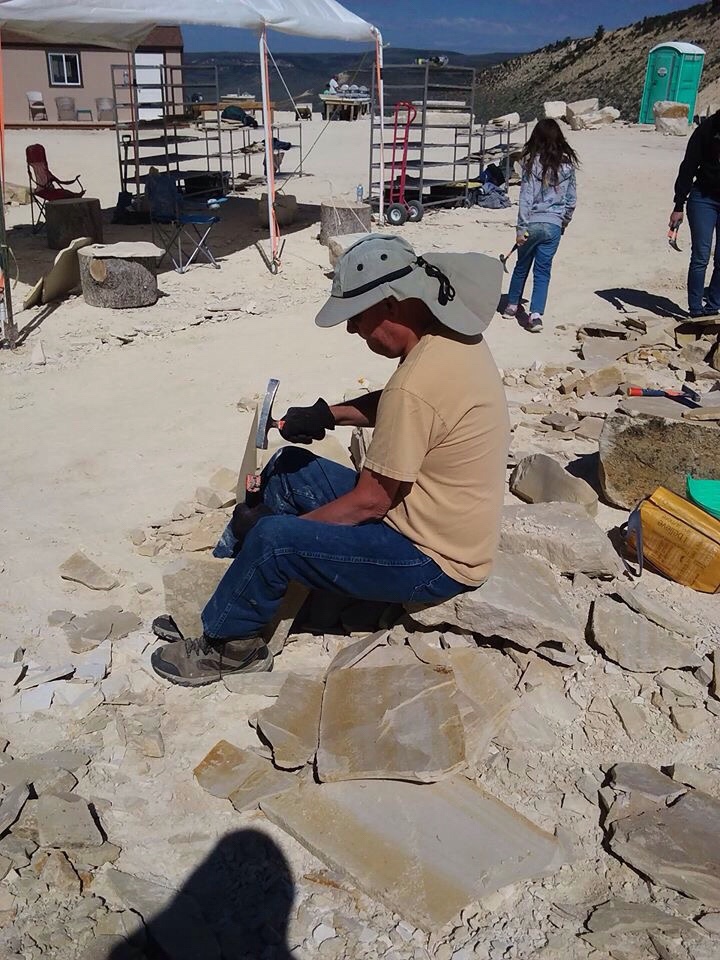 Before we got to the digging site the owners had prepared the way. We chose the American Fossils site because it had the best reviews and you could keep everything you found, (not like other sites that only let you keep some of the specimens you find. )

They had dug out a lot of rock for us to split using their caterpillar tractor, shearing off sections of the rock wall where the fossils are located. 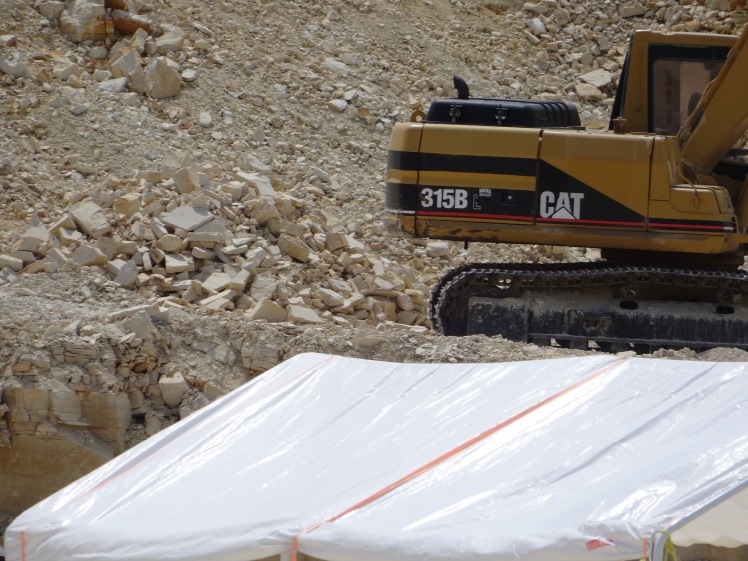 How to Find Them:

We were not only given the tools but also shown how to split the rocks. You put the piece of rock up on its side and place the chisel in the middle of the rock. You then tap on the stone causing it to split into layers. You can keep splitting the same rock several times this way. Some amazing discoveries have been made even in tiny rocks. We heard that a young kid had found a shrimp in a piece of rock about 6 inches square. The rock layers we were splitting already contained layering so you were just trying to find the layer where the fossils were buried. It wasn’t long before we started finding fossils. Below are some of the ones we found in our two hour dig.

Cutting Them Down to Size:

After we collected our haul, we took them over to the area where you can cut them down to size removing the unnecessary weight of the surrounding rock. One of the owners helped us at first and then told us we could continue cutting down our specimens at our own risk using the saws there.

Our Helper: He not only showed us how to split the rocks, and identify what we found, he also helped us cut them down to size.

After we had dug our own fossils we traveled down the hill to the Fossil Butte National Monument to see other fossils that had been found in the area where we were digging. Not only did they have excellent examples of the fish, they also had fossils of plants, insects, bats, reptiles, stingrays, and even a crocodile and horse. If you ever go to Wyoming you have to visit this place! Here are some of the fossils we saw there: 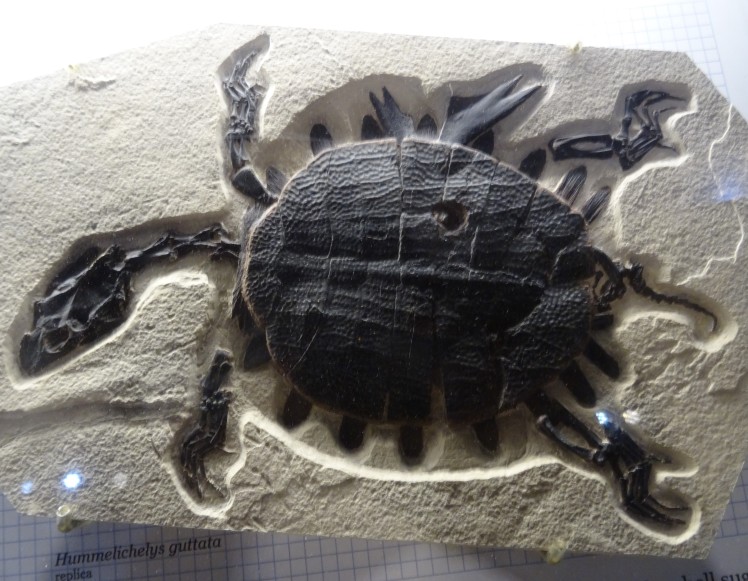 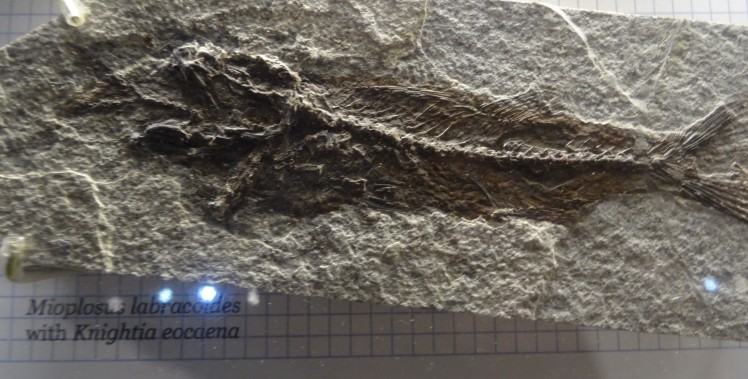 Below is an example of how vast the numbers of fish were fossilized in this area in a single slab of stone. 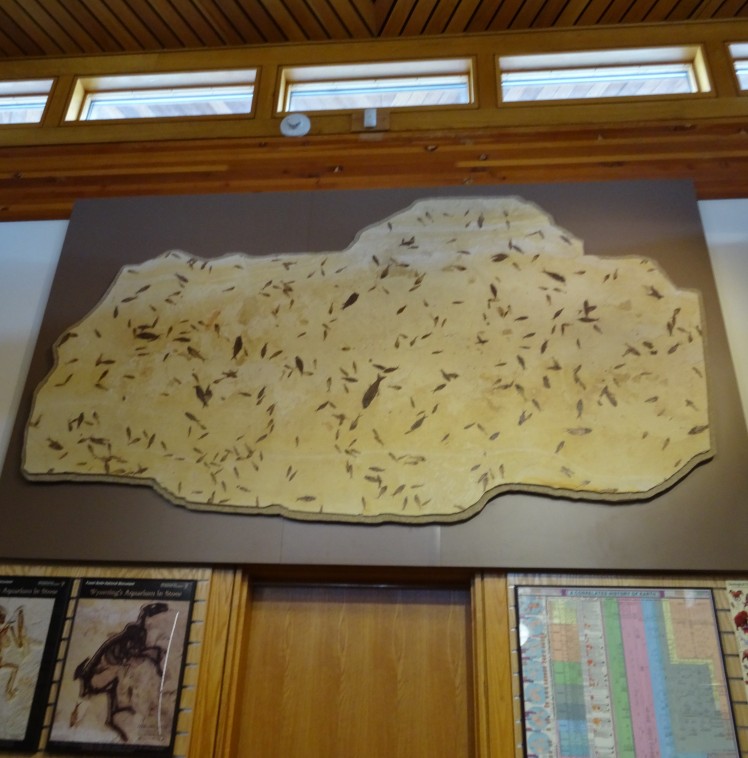 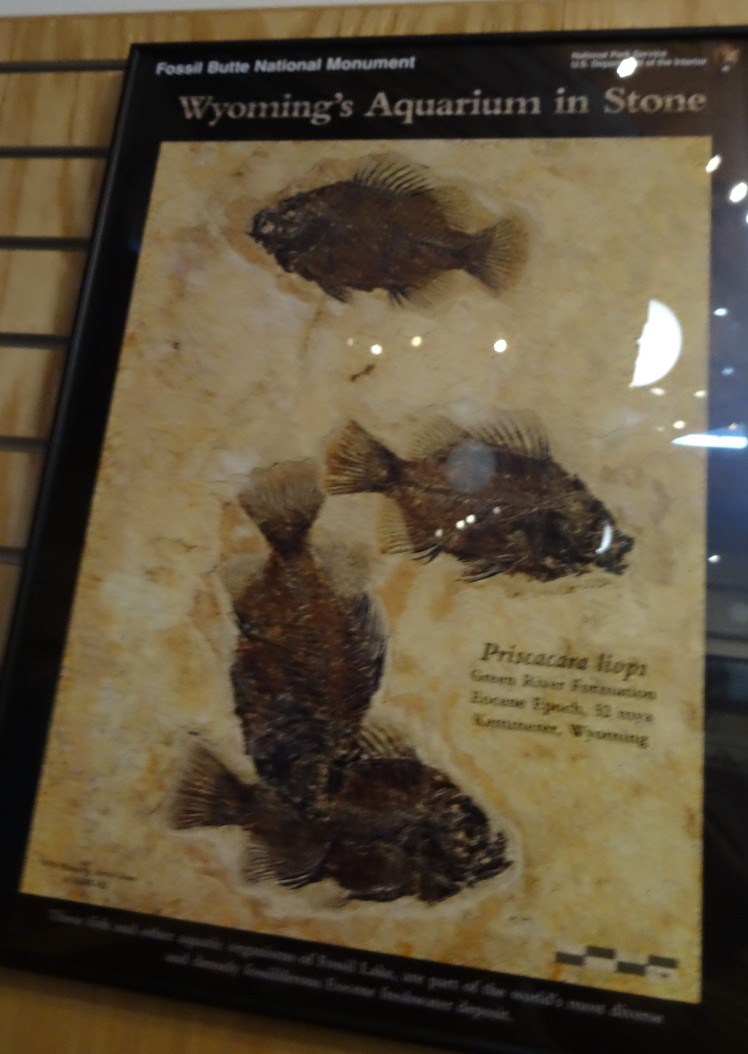 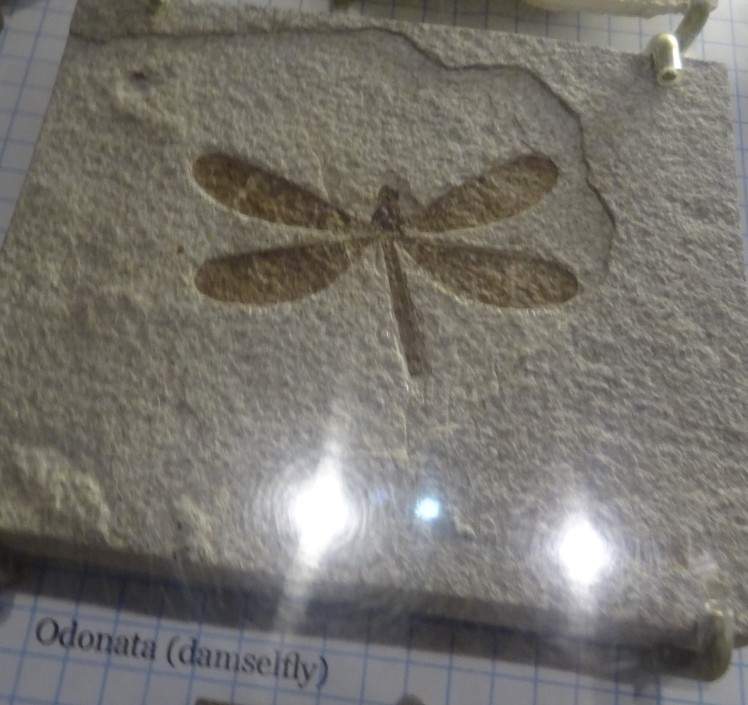 The Environment Was Much Different Then:

From the vegetation found in fossil form you can see that at one time this area was very tropical in nature. The palm fronds and crocodiles also show you that there were many different types of creatures living there that aren’t there today. The area we were digging was at a high elevation. At one time it must have been much lower.

One of my favorite experiences at the museum was talking to a paleontologists who was working on cleaning up a specimen of a fish found in the area. I was standing out in front of the area where he was working and made a comments questioning what was going on and found out that he had a microphone and listening device inside where he could interact with those watching. In front of where he was working was a fish fossil that he said was his favorite of all those he had worked on to date. He was using a special tool that was like a pointed needle that rotated so he could gently remove the surrounding matrix bringing out the bones and other structures of the fossil.

The museum workers are very helpful and will answer your many questions.

Do Some Research On Your Own:

If you have never considered the evidence that is used to support the various aging methods of fossils, it is quite interesting. You will find that this area of study can be quite controversial. Don’t let that stop you from studying it! You can find articles and books written from a wide variety of viewpoints. Check out some of the Creation Science sites as well as some of the books written on the subject. You can also find videos in which scientists discuss the evidence they have discovered studying fossils.

If you get the chance, go dig some fossils of your own. It is a fun experience. I have dug trilobite fossils in Utah and fish in Wyoming. I look forward to digging fossils elsewhere in the future. 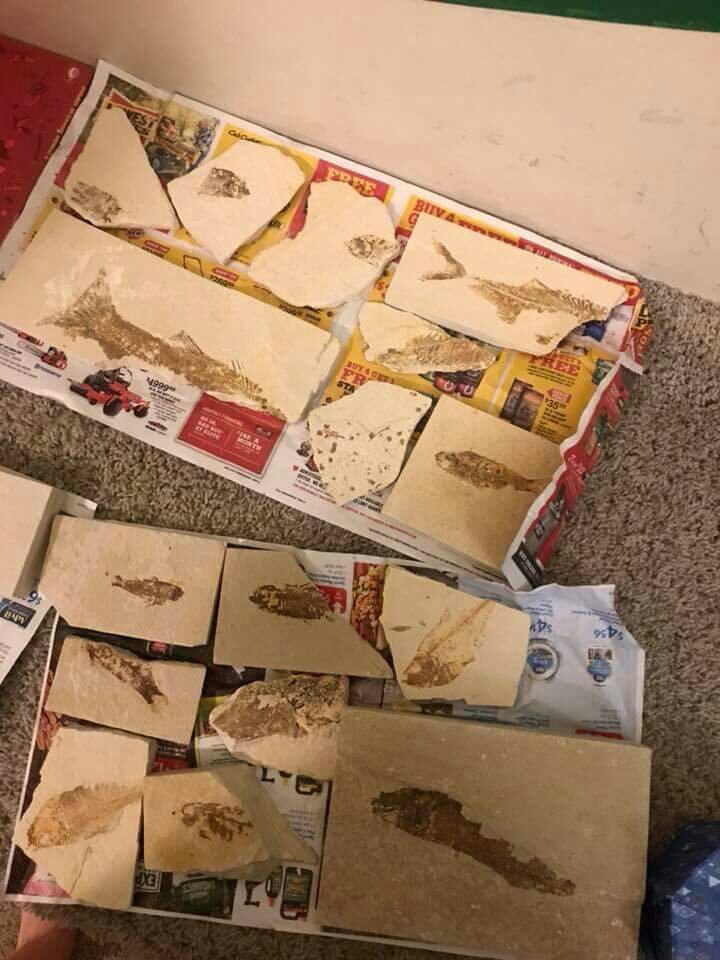 2 thoughts on “Fishing for Fossils”