Look what I found in my garden this morning. 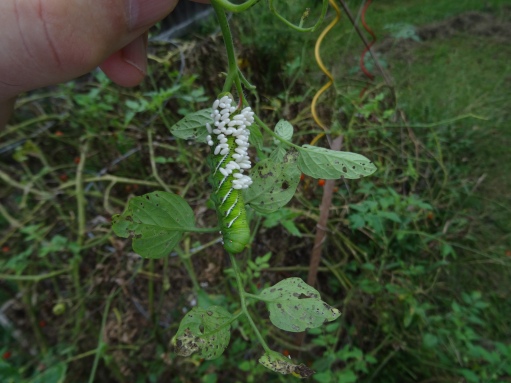 I have noticed recently that a lot of my tomatoes and tomato vines have been disappearing. One of the gardener’s worst enemies, the Tomato Horn Worms, have been taking away a lot of my harvest. These little green “worms”, actually caterpillars of  the Tobacco Horn Worm Moth, are very destructive! Their scientific name, “Manduca quinguemaculata”, actually means “Big Eaters”. And believe me, they live up to their name!  Well…., they have met their match!

My eyes were quickly attracted to the white color of the insect cocoons protruding from the backs of the caterpillars. These white cocoons are the result in an attack from an unlikely little “garden helper”. The female Braconid Wasp flies in and finds the caterpillar and then sticks her ovipositor, (tubular organ through which a female insect deposits eggs), into the skin of the tomato worm. These tiny pointed structures look like stingers and often do carry chemicals that are harmful to the worms they attack. When the eggs hatch the larvae feed from the inside of the caterpillar until they reach the size needed to form a cocoon. The cocoons are the white structures on the backs of the caterpillars. When the wasps are fully formed they emerge out of the cocoons and start looking for flower nectar.  As I viewed pictures of the wasps I was amazed at how small they were in relation to the caterpillars they parasitize. They are barely half the size of the caterpillar’s eye! This reminds me of the battle between David and Goliath. One of the combatants was much larger than the other in yet the smaller was the victor. In the case of David, it was God’s intervention that led to the victory. Size is not always an advantage in the natural world.

It wasn’t very long after discovering the first parasitized worm that I saw another. The white color of the cocoons allows you to see them quickly. Most of the time it is very difficult to locate the worms eating up your garden. I usually find them by seeing where they have been feeding and then look for their “poop” deposited all around where they have been feeding. I look for them on the stems or under the leaves nearby. They seem to be easiest to locate in the morning or just before the sun sets when they more actively are feeding. Did you know the wasps actually also use the “poop” to locate their prey as well? Rather than looking for the feces they actually have keen smell detectors that can pick out chemicals in the waste of the worms. In fact, their ability to detect chemicals has come to the attention of scientists who have found other ways to use their super powers.

The ability to “sniff out” chemicals emitted by their prey by smelling the fumes from the feces of the worms has been used as a way to detect the presence of explosives. After being trained to recognize the chemicals used in bombs the wasps demonstrate different behavior when in the presence of these chemicals allowing those looking for these dangerous objects to locate and dismantle or destroy them before they cause any harm to those who would encounter them otherwise. Isn’t it amazing that such a tiny insect could demonstrate such profound abilities? I think that just goes to show how amazing the insect’s Creator is. Who could design such amazing animals?

Have You Had Your Flu Shot?

Something that I learned in my research of these wasps that was interesting is that they actually use chemical warfare. While inserting their eggs in the host caterpillar they often also inject viruses. These viruses compromise the worm’s immune system. As the viruses develop in the worms they retard the growth and slow the worm down allowing the emerging larvae to have an easier time consuming their host. When we get a flu shot at the doctor’s office we are actually getting weakened forms of viruses in the injection process. Because they are weakened before being placed in the serum, they allow our bodies to recognize the virus.  Our strong immune systems create antibodies to prevent any future attacks by the virus thus helping us avoid the devastating effects of the disease. In the case of the worm, however, the worm gets a strong version of a virus that has complete control in its new environment.

Would You Like to Have These Helpers in Your Garden?:

For those looking to grow vegetables without the need for pesticides, organic gardeners, it is good to know what attracts these wasps to your garden. In some cases you can actually order them on-line. Trichogramma pretiosum is the scientific name of some that are often purchased on-line. A better way to get them in your garden is by attracting them with flowers!

Since the adult wasps feed on the nectar of flowers, you can add plants to your garden like: carrots, radishes, dill, mustard and turnips. These plants naturally attract the wasps. When the wasps come in for dinner they look around, (actually “smell around”), and detect the presence of the caterpillars on other plants in your garden. They alter their feeding and fly over to parasitize the caterpillars insuring another generation of wasps to do the same job next year. 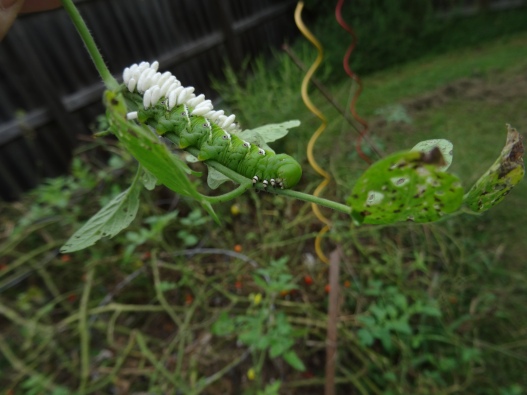 Thank God for the Small Things:

As I read through the Bible in my daily devotional time I have discovered many places where God shows us how He works using the smallest things and what seems to us as “insignificant” to accomplish major tasks. As I think about these tiny wasps overpowering their huge host, I think of passages like the following:

Remember that God can help you face your greatest fears and lead you to victory. He delights in using those who are humble to do His work.

Thank God for His Creation:

As you go through the coming week, think of the tiny, insignificant things around you; things you may not even see but have a profound affect on your life. From the smallest virus to the largest animals, each has a place in the overall design of Creation. Don’t miss the message that God is trying to communicate to you through His Creation, His Word, and His Son, Jesus Christ. Your life can be changed by responding to the message. 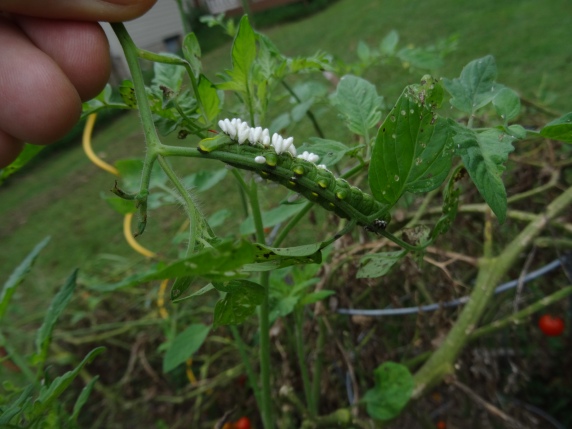 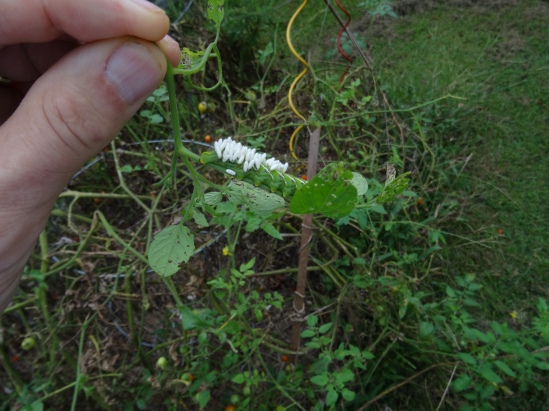 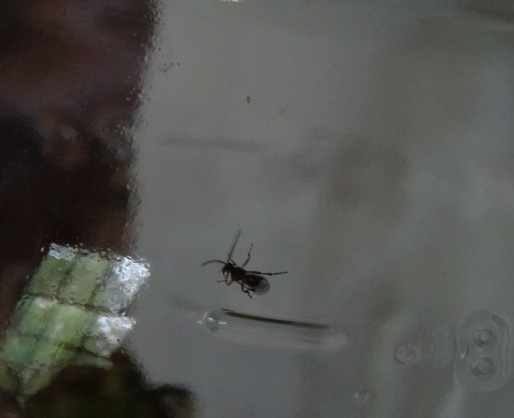 After keeping the caterpillars that had the white cocoons on their backs for a day inside a mason jar, this is what emerged. There were at least 20 tiny wasps flying and crawling around inside the jar. It will be interesting to see how many more emerge. They are so tiny! They are only about as long as the length of a letter typed size twelve on your computer.