Not Just Another Fly:

When one thinks about flies we usually picture those annoying house flies that seem to want to buzz in and land on your food when you have an outdoor picnic. But not all flies are the same. Can you think of a fly that is known as an Assassin?  One such creature is the Robber Fly. 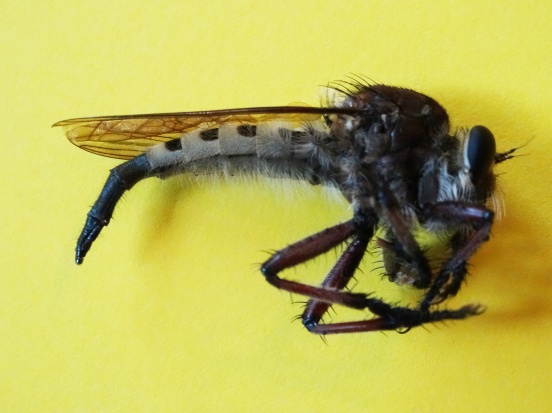 Not only are they known as “Robber Flies” but they also are called “Bearded Flies“, “Assassin Flies“, “Hanging Thieves“, and “Bee Killers“. That’s quite a rap sheet!

They Live Up to Their Reputation:

These aggressive flies are known for their sneaky tactics. They are airborne attack artists. They usually sit in wait hanging from a perch near areas where flying insects travel. When one is sighted they zoom out at grab the unsuspecting insect with their long hairy legs. They then puncture the body of their prey with their long pointed mouth part. When this enters the body of their prey it quickly immobilizes and paralyzes it with special enzymes included in the fluid injected into the bite. The saliva injected contains a powerful neurotoxin that attacks the muscles of the insect prey. This fluid not only subdues the prey, it also begins to digestion. The flies then travel to a nearby perch and suck out the fluid from the dissolved protein within the bodies of the insects consumed. When done with their meal, they drop the outer remains of the body and move back to their perch to wait for another victim. 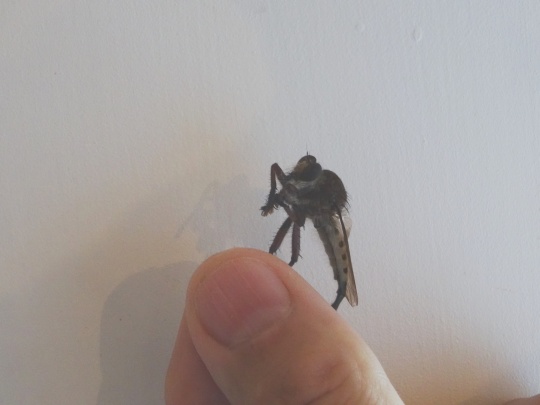 Interestingly there are over 85 species of these flies in North America and thousands world-wide. They range in size and coloration. Some even mimic bees for protection and stealth when chasing their prey. Some are as small as 3/8 ” but range all the way up to 1 1/8 ” in size. They are members of the Animal Kingdom, the Phylum Arthropoda, the Class Insecta, and the Family Asilidae, and Order Diptera (the flies). One characteristic of all flies is that they possess two wings instead of two pair as in other flying insects. 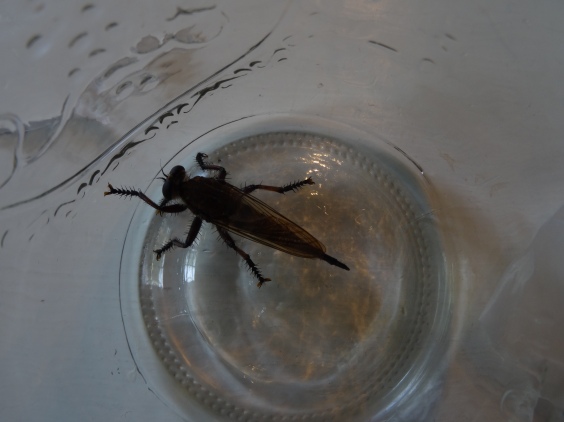 Why Not Pick On Someone Your Own Size?

Believe it or not, Robber Flies are not shy when taking on other insects. They can easily capture insects their own size and even larger. They specialize in capturing members of the order Hymenoptera (the bees, wasps, hornets and bumblebees). Even though these opponents have powerful weapons to fight back, the Robber Flies usually win the competition. They also buzz out and grab dragonflies and butterflies. One amazing thing experienced by some observers was when a large Robber Fly actually capture a small hummingbird. ** 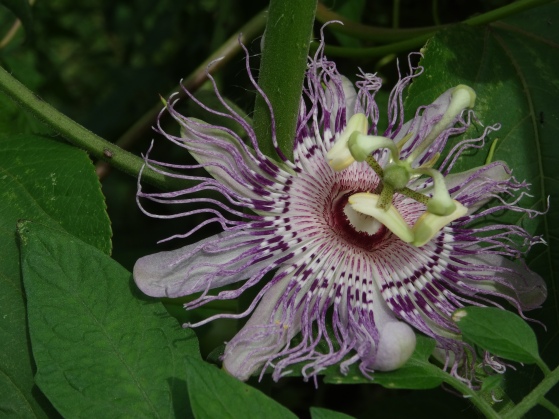 One interesting behavior of Robber Flies is where they like to hang out. They often perch themselves near nectar producing flowers. Seems like a good idea because that way their food comes to them. Another by-product of this behavior is the opportunity to augment their diet with a little sugar nectar from the flowers. It seems that female Robber Flies need a little sugar when  producing their offspring.

Is That A Stinger?

If you look at the end of the abdomens of some Robber Flies you will see a long pointed structure that looks like a stinger. It is actually an ovipositor, (and egg laying device). If you have ever been bitten by a robber fly, however, you will think you’ve been stung. The bites are painful but rarely experienced unless you are handling them roughly or traveling through an area where food is scarce. I remember being bitten by one while hiking in the Sierras. Their bites are not pleasant but are of no lasting concern. 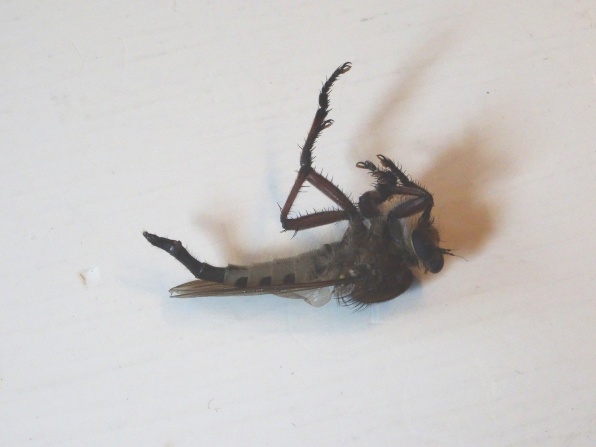 Are They Helpful or Harmful?

A good question often asked by gardeners is whether or not these creatures are helpful in the garden. The answer is a of mixed opinion. They seem to have a taste for grasshoppers  and leafhoppers which cause a lot of damage to crops. Since they feed on these and a lot of other pests that feed on your veggies they are helpful in that way. However, they are not selective in which insects they eat. They also consume a lot of the pollinators that transfer pollen from one flower to the next allowing the production of the fruit and veggies that you are growing to harvest in season. For the most part, scientists believe their overall presence is helpful in maintaining balance in the food webs and providing food for other animals. Those who raise bees for honey and wax would say, “We don’t want them around our hives”. They aren’t called “Bee Killers” for nothing!

Do They Have Any Enemies?

Robber flies are often part of the diets of birds, bats, praying mantises, centipedes, assassin bugs,  Ground Beetles and  other Robber Flies. They are also occasionally trapped in the webs of spiders. 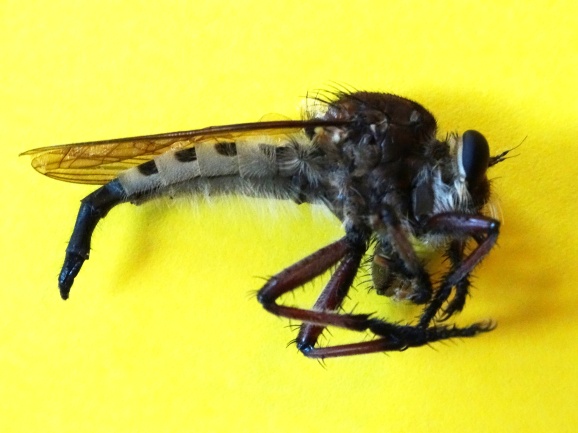 Robber flies, like many other insects, go through complete metamorphosis: egg, larva, pupa, and adult. They begin as eggs which hatch out into larvae. The larvae are worm-like grubs which spend up to 3 years developing. In this stage they are usually living in decaying plant material or the deteriorating bark of fallen trees. In this stage they are also active predators feeding on the many other insect larvae developing along side of them. Once they get big enough they form into the pupa stage and later emerge as adults. As adults they only live for about three months before they mate and die. The females deposit their eggs in the soil to start the whole process over again.

One distinctive characteristic of these flies is the depression between their large compound eyes. This can be seen more clearly if you look down on them from above. Below you can see what they look like from the bottom side of the body. Notice that their antenna are very short. Their beak-like mouth is held in a slot under their chins and can easily be swung out when needed to pierce the prey. 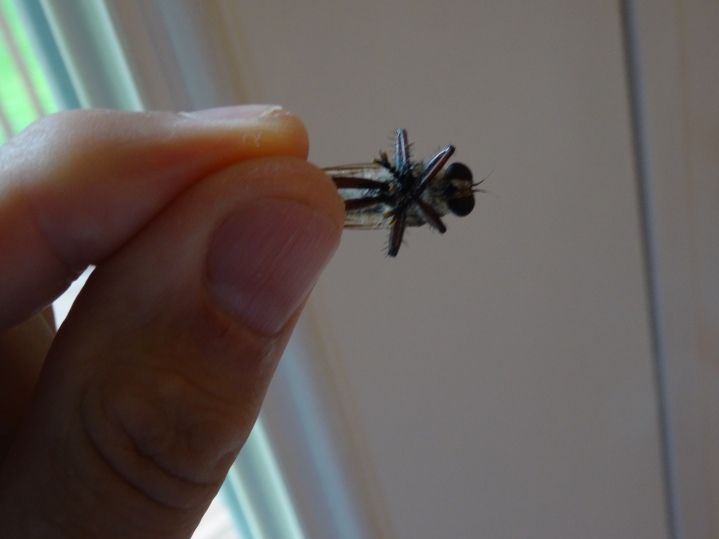 Did You Hear That Buzz?

One way to know these flies are around is the loud buzzing sound they produce as they fly by.

They Have Quite a Following:

Did you know there are many people who find these insects so interesting that they have formed groups to study them?      If you want to read more about these insects you might check out the following web sites:  The Asilidae Homepage,  and Roy Beckemeyer’s Asilidae Homepage. One of the most interesting blog post I read was the one that described the hummingbird incident. It was http://www.hilton pond.org. **You can also check out the National Geo, Wikipedia, and the Audubon web sites.

They Are Part of the Big Picture:

As I observe and research the many creatures I find in the wild I am always trying to get a view of the bigger picture of life’s purpose. When I look at the many specialized features of this insect I am reminded that there had to be an Amazing Designer. The many features these insects possess reveal an intentional design by a Master Creator. They were designed to fill an important role in the overall environment. The closer we look at Creation the more evidence is found of the bigger picture. God also has a plan for your life. Do you know what it is? You can learn more about this by reading God’s Word, the Bible. It tells us everything from the original Creation of living things to the future of mankind.

Make You Own Observations:

I hope you will take some time to explore God’s Creation yourself. There are so many interesting things to discover.