Out to Sea from Destin, Florida

It was early in the morning when I got up to go deep sea fishing in the sports fishing village of Destin, Florida. Once you arrive and board the party fishing boat, you are off for a two hour ride into the Gulf Bay. I went out on two different boats during the three days I was there: The Destin Princess and The Destiny.

Ready to Catch Some Fish?

Once the captain located a good fishing site the deck hands gave us instructions on how to catch the fish. To catch Mingo you have to lower the bait to the bottom and then bring it back up about nine cranks of the reel. It doesn’t take long to get a bite! They told us that if you were not getting bites within 30 seconds you have probably lost your bait. It seems the larger fish like to be just above the bottom. 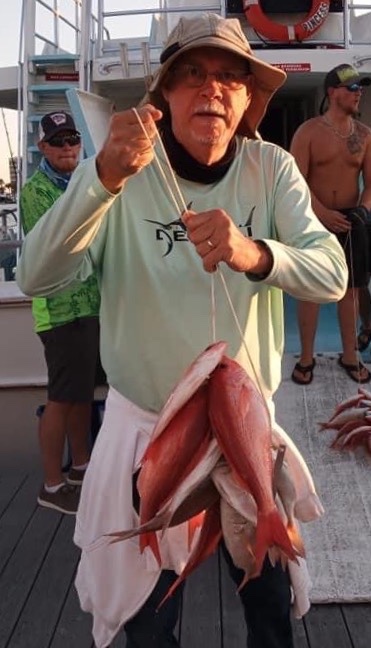 These fish were often caught two at a time on the two hooks on the line. When you get into a school of them you have to quickly get your bait down while they are still biting before the captain tells you to bring up your lines to move to a better location.

What’s In A Name?

At the first stop some of us were a little confused when they called out the names of the fish we were catching. We could only keep the White and the Vermillion Snappers, but not the Red Snappers which were out of season. Sometimes they called the Mingo Snappers Vermillion and sometimes they called them Beeliners. After asking a few questions we learned that these fish have several nicknames. No matter what you call them, they are plentiful and will fill your stringer fast.

Scientists are more specific when naming creatures and use Latin names for each species. The scientific name of the Vermillion Snappers is Rhomboplites aurorubens. As you can see, the nicknames are easier to pronounce and remember.

What Bait Do You Use?

We were offered two types of bait: cut up mackerel and squid. Each piece of bait was about a 1 inch square. We found that the squid stayed on the line better, but the fish will eat just about anything you offer them.

Special Hooks So They Catch Themselves:

When the fish bite you do not jerk back to set the hook! If you do you will just rip the hook from their soft mouths. what you should do, however, is reel in the line like crazy. I discovered that if you brought them up slowly you were likely to have them bitten off by sharks and dolphins. One of the times I was bringing up what must have been two Mingo fish when all of a sudden my line jerked down and then went loose again. When I reeled it up I was missing both hooks which had been cut off by the razor sharp teeth of a shark. Another time my line came up with just the head of a fish.

Here was one day’s catch of snappers. Notice that most are Vermillion/Mingo Snappers. I also caught some of their cousins the White Snappers. Notice the forked tails which help you know they are not Red Snappers which have a square tail.

These Are Great Fish to Catch!

As you probably know, many fish species have been over harvested to the point that they are endangered. When you go fishing you need to know the rules and regulations for the species you are likely to catch. You might even want to choose what time of the year you go to target specific types of fish. I was disappointed that I had to return my largest Snappers because the Red Snappers were out of season. Fortunately the Mingo fish are currently in season all year round which makes them a favorite target fish for the captains of party boats. Catching a big stringer of Tasty Mingo Fish seems to keep everybody happy while you still have a chance to catch other varieties of fish that live in the same environment. Since the Vermillion Snappers reproduce many times a year and produce thousands of eggs, it is assured that this species is a very sustainable catch. They are also tasty! They have a mild sweet tasting flesh that is low in sodium and fat, yet high in protein. They are easy to filet and one fish gives you about the right amount of fish for one person’s meal. You can cook them up several ways: fry them in butter or olive oil, bake them or grill them. They also taste great in fish chowders when cut into small cubes. 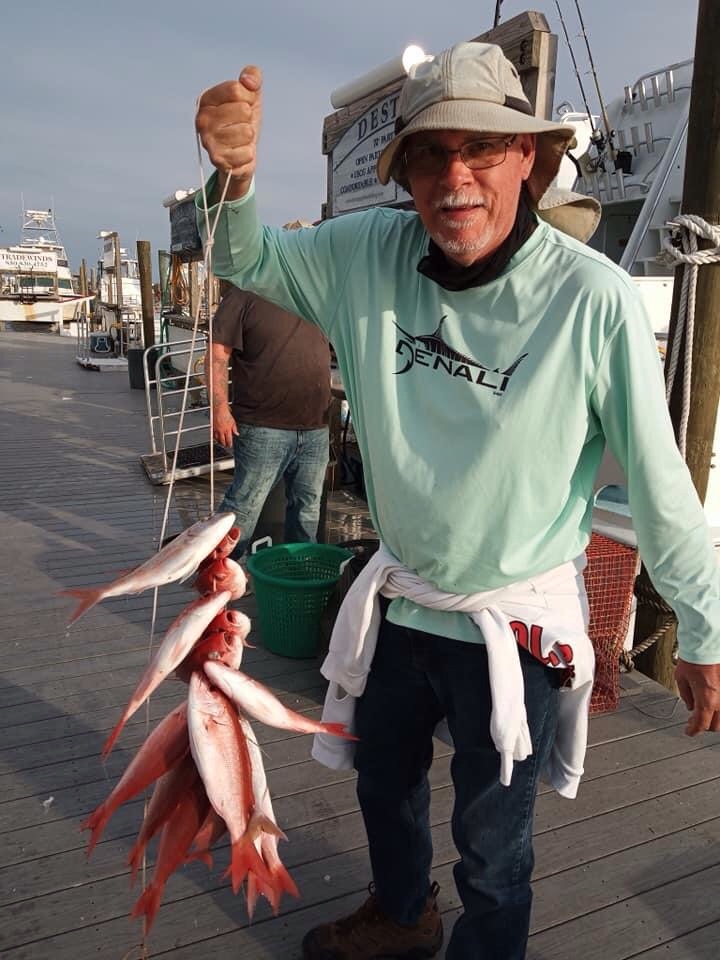 In my thee days of fishing I caught a total of 56 pounds of fish. The majority of those fish was by far the Mingo Fish. 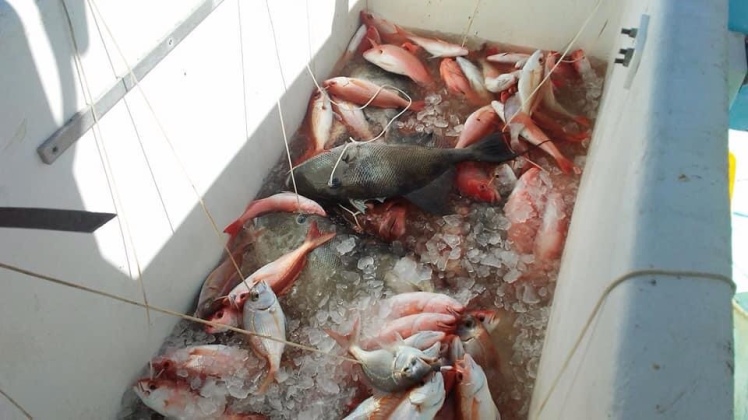 This is the catch of one side of the boat. Notice how many Mingo fish are in the ice.

Vermillion Snappers are reddish orange on the top and slowly fade to pink as the color goes toward the bottom of the fish. The bellies are silver white. Sometimes you can see some streaks of yellow in stripes on their sides.

Mingo fish have small mouths unlike their bigger cousins the Red Snappers.

Once hatched, baby fish rise up to the surface to feed on small creatures inside the seaweed mats toward the surface. When they get larger they descend to the bottom where they hang out over reefs, banks, artificial reefs and shipwrecks. They also like to be near where the banks drop off on the sea floor and around oil platforms.

They grow very slowly. It takes about a year for them to reach 5-7 inches in length. They can live up to 21 years and reach weights up to 7 lbs. the world record is 7 pounds and three ounces caught by John Doss in the Gulf of Mexico in 1987.

The average size caught is between 1 and 2 lbs.

Fishermen call them “Bull Mingo Fish” when they reach about three pounds. Most of the fish this size are males.

Most Vermillion are caught between 80 and 350 feet deep.

The dorsal fins of Vermillion are rose colored with yellow edges.

They are native from North and South Carolina, the Gulf of Mexico, as well as the Caribbean Sea all the way to Brazil.

A view from the Destine Princess on the way out to the fishing area.

Variety Is The Spice of Life!

As I discover new creatures in God’s creation I am reminded of how many different kinds of creatures He has created that live in many different kinds of habitats. Just think of how carefully He must have thought through the design of each species. Some live in the deepest oceans. Others live in to top water. By creating them with different adaptations He assured they could all survive and balance out the food and territory requirements for survivor ability. It is important to realize that He has given man the responsibility for how we treat and manage these resources. When we use common sense and more carefully study a His creation we can enjoy what He has provided for us as well as insure that the supply can be enjoyed by others in years to come. When was the last time you thanked Him for creating the fish we like to catch, eat and study?

“Give thanks in all circumstances; for this is the will of God in Christ Jesus for you.” I Thessalonians 5: 17

I often just take the time to speak out, “Thank you, LORD” as I am fishing. If you have a thankful spirit of gratitude you will find yourself enjoying your fishing time more. Someone else might also hear you and you might have a chance to share your testimony of how God is working in your daily life.