It was a real treat to find this little frog yesterday when I was weeding and trimming brush around my house in Spring Hill, Tennessee. Though these frogs are usually unseen they are often heard when making their mating calls usually in May and June of the year here in the Eastern part of the United States. Their call is a high pitched trill and can be heard from a great distance. (If you want to hear what they sound like you can find several examples on Google) .

Though we live in the south eastern portion, they are found even farther north on this side of the U.S. They can even survive the cold winter months using an amazing survival strategy. When God created these little amphibians He provided them with the chemical glycerol in their blood. Glycerol is like a biological antifreeze. When the cold winter months arrive the frogs go into a state of hibernation. Up to 80% of their little bodies can freeze up and their heart rate and breathing decrease to a minimal state. The glycerol allows them to survive by keeping their organs and membrane from breaking up. As soon as the temperatures rise to safe levels they thaw out and become active again.

These little frogs spend the majority of their lives in solitude. They only come together during the mating season. So where would you usually find them if you were to go out looking for them? Well, they don’t call them treefrogs for nothing! They are excellent climbers and have specialized toe pads which allow them to adhere to the bark of trees. Their moist bodies also help in keeping them in contact with the branches and trunks of the trees where they make their homes. Scientists use the term “arboreal” to describe creatures that live in trees.

Important Part of the Ecosystem:

Believe it or not there are a lot of food items up in the trees. They feed on flies and mosquitos and other small insects. The adults have a different diet than the young. In the early stages of metamorphosis the tadpoles/pollywogs are vegetarians feeding on algae and decaying plant material. After they shed their tails and emerge on land they subsist on a diet of smaller creatures like insects, worms, spiders, etc. These frogs are in turn eaten by many other creatures like birds, small mammals, larger frogs and salamanders, snakes and even giant water bugs.

Though they have many enemies, they also are equipped with some very effective defense mechanisms. One of these is their ability to change color and skin patterns to adapt to various surroundings. Though most often found in gray tones, they can also turn green and various shades of these colors. The one I found was a perfect match to the lichen growing on the wooden fence post. They can make this color change fairly quickly and even vary from dark to lighter shades depending on the surrounding temperatures. Warning! If you ever find one and decide to handle it, keep your hands away from your eyes and nose! They emit a toxic slimy substance from glands in their skin. It can cause a lot of discomfort if it gets in eyes or the mucus linings of your nose. It can also cause skin irritation in some individuals. It’s best to just observe them and not handle them in the wild.

If You Want to Win You Better Sing a Good Song!

When the mating season comes with the spring rainfall the males begin singing their songs trying to draw in a mate. He better sing a good strong song or he will be avoided by the picky females. They only go for the best performers.

Once a female is attracted the male grabs her and she lays her mass of jellylike eggs. (The female can lay a cluster if eggs from 100 to 200 in number in a single clutch.) The male then fertilizes the eggs and returns to his tree top existence. Shortly thereafter the little tadpoles emerge and begin feeding in the water. After a couple weeks they gain their front legs and drop their tails and crawl out onto the land to continue their life cycle. 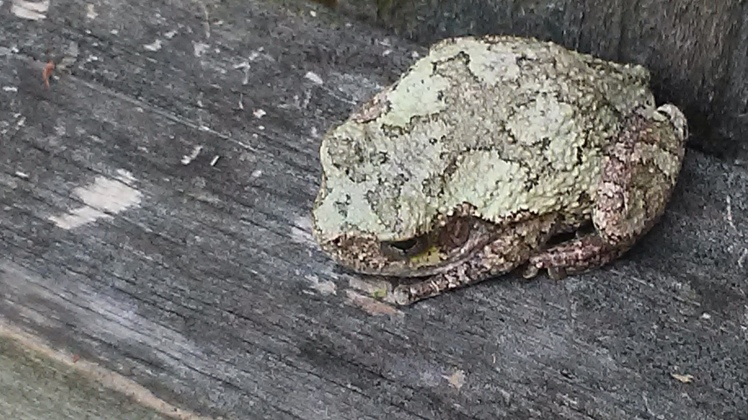 Notice the Warty Surface of the Skin.

In the above picture you can see the texture of their skin. Like other amphibians their skin must remain moist so they can absorb air through their skin. They have receptors in their skin that can let them know about their surroundings. They are very sensitive to vibrations as well. Like other frogs they can hop away if danger approaches or crawl into crevices or under bark and into moss and lichen to hide.

Every Creature Has Its Place and Purpose:

When exploring your surroundings looking for creatures to study and watch their interesting behaviors, take time to consider the evidence of design. When God created the world and everything in it He had a reason and purpose for every thing He made. Each creature was given the built in features it would need to adjust to changes in its environment. Those creatures that would be food for others were designed to reproduce in greater numbers so that there would be enough food for the predators and enough survivors to carry on the species. You will find an incredible interdependent relationship between all creatures, great and small. The balance between how one organism affects the others can easily be knocked out of balance if we, God’s caretakers of His creation, don’t do our part in preserving the environment around us. 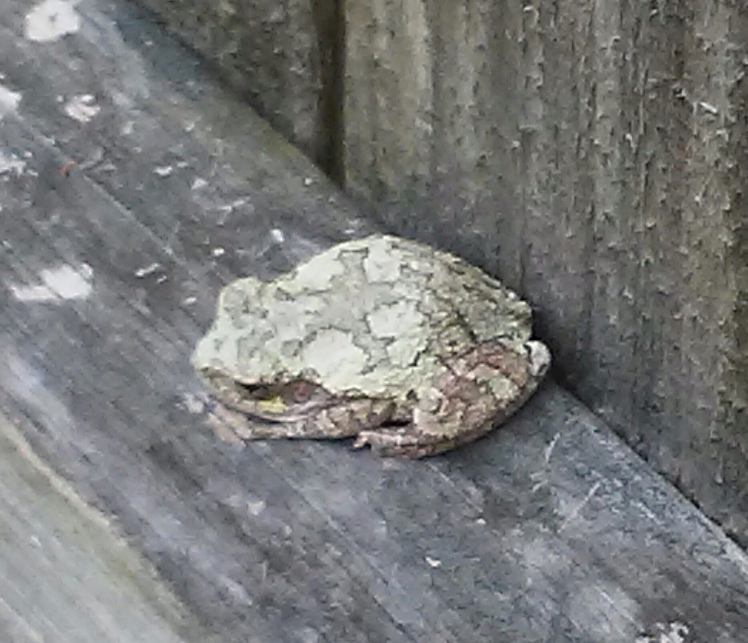 Do You Know Your Purpose?:

If you have never taken time to consider this important life question, it would be important to consider it now. According to God’s Word, the Bible, we were created to glorify God and enjoy His creation forever.

” Now faith is confidence in what we hope for and assurance about what we do not see…..And without faith it is impossible to please God, because anyone who comes to Him must believe that He exists and that He rewards those who earnestly seek Him.”

God has given us so much evidence of His existence in creation. The closer we look the more we see. He also gave us His Word, the Bible with the recorded history of the world and the prophecies of the future. So many of the prophecies recorded there have already come true and there is so much more to come. Be sure you don’t miss the opportunity to personally have a relationship with your Creator.