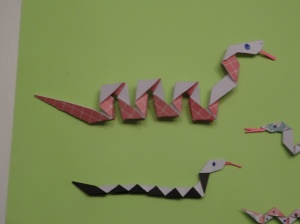 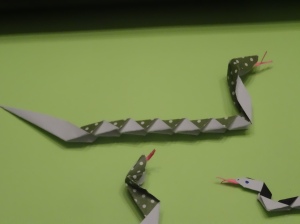 One of the interesting things you can make with the left over scraps of paper is snakes. These were all made with left-over strips of paper from other origami projects. All you need is a long strip of paper and knowledge of how to fold pop and hood folds, and snakes are in your future.

Bend Them Any Way You Want To:

As you can see in the above photographs, you can make the folds bend in many ways to create just the look you want. Some are just up and down diagonal hood and pop folds. Others, like the pink one, are developed by combining folds that bend back over previous folds and then back out again. Experiment and you can create several different snake types. I even made some with Cobra Hoods.

Stick Your Tongue Out!    Add A Tongue and Eyes: 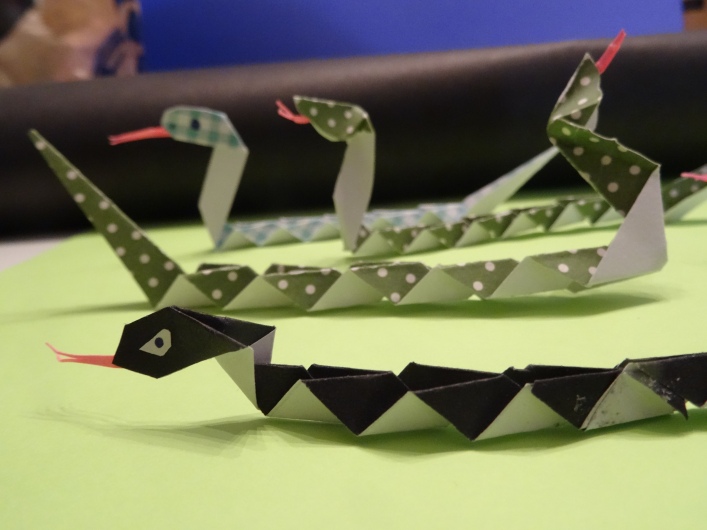 If you take a small piece of red or pink paper and slit it down the middle, leaving only a tiny section still attached, you can make a tongue. Curl it up and add a drop of glue and insert it into the head to make the tongue. The eyes can either be added with a felt tip or you can cut smaller pieces of paper and glue them onto the form. You can also add spots by using hole punched paper. Just a tiny drop of glue holds them in place. 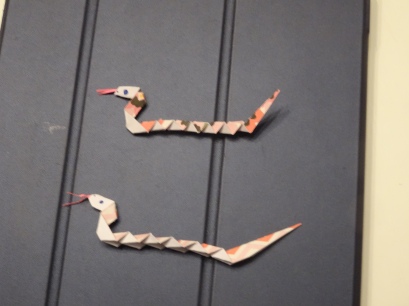 You Can Vary The Sizes:

Depending on where and how you want to use them, you can make them any size depending on the piece of paper you start with. I recommend you start with a long strip of paper. Once you reach the size you want you can cut off what’s left and have a snake just the right length and shape.

Use Them To Illustrate a Story:

It’s interesting to note how many stories involve snakes. Usually the snake is the villain! One of the most interesting stories is found in the Book of Genesis at the beginning of your Bible. It is the story of the Garden of Eden and the fall of man. We also see snakes on a pole as Moses raised them up to ward off the plague that was harming the Children of Israel as they wandered in the wilderness. The serpent being lifted up was a type of the future raising of Christ on the Cross. All who looked on the serpent in faith were healed. (Have you ever seen the medical symbol with a snake on it?) All who turn to Christ as their salvation receive eternal life. In the New Testament we read the story of Paul in the Book of Acts, who was bitten by a poisonous snake after surviving shipwreck and an amazing storm. After he was bitten, the natives of the island where they landed stood around waiting for him to die believing that he was bitten at the direction of an angry god because he was a prisoner. Little did they know that he was only a prisoner for sharing his faith, not for a terrible crime like many of the other prisoners on board the ship. Of course, our loving God (not the angry pagan gods) was quick to use this as an opportunity to allow Paul to share his faith with others on the island. As a result of this snake encounter many came to know the Savior as LORD and Master of their lives.

Isn’t it interesting to note that God can use even creatures despised by many to teach us important lessons. Take some time to look at some of the snake types and recognize their creative beauty. So many interesting patterns and behaviors. Just remember that the reason so many despise them had to do with man’s original sin in the Garden. Even snakes were created with a purpose! 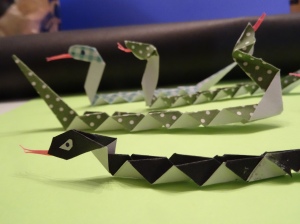