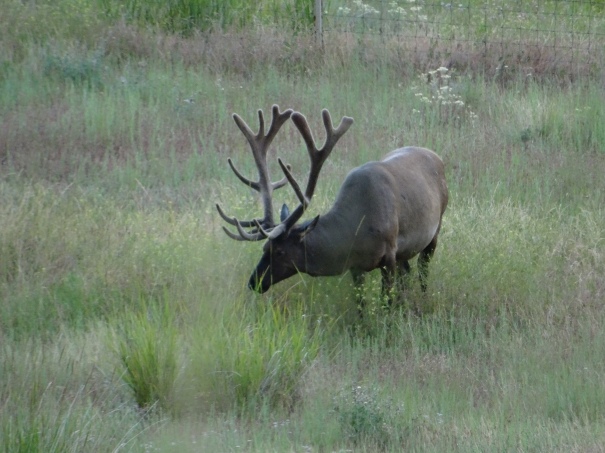 While on vacation in Montana this summer, my wife and I spent a day in the National Bison Wildlife Refuge. Besides the Bison (Buffalo) we also saw other creatures. One of the most interesting was the Elk. I was immediately impressed by their size! Some bull elk can be over 1,000 lbs. in weight and be over 8 ft. long from nose to tail. Now that’s big!

One new thing I learned while doing research is that these creatures are also known as “Wapiti”, a name given them by the Native Americans in the past. The word means “Light colored deer.”

An Interesting Fact About Elk:

At one of our first stops in the park we encountered this pile of elk horns. Did you know that elk drop their horns every year and then grow a new pair? These are some that have been found in the park over the years. As you can see, even though I am over 6 ft. tall, the horns are higher than I. Just one pair of horns can weigh up to 40 lbs. Now that’s a weapon to be respected! The male elk often use these to fight for the right of selecting the females for reproduction. These battles have been known to end in death. I wouldn’t want to anger a bull elk! The horns are often gathered and used as decoration and made into various objects. Hunters like to hang them on the wall as a memento of their hunting trip.

It’s interesting to note that the male elk do not live year round with the females and young. They go off and gather with other bull elk until the mating season comes in the fall of the year. We saw four in one group but these groups can be larger.

Friends Until the Rut:

The bull elk get along well until the rut. Their antlers are covered in velvet, a soft fuzzy covering on newly grown horns. When they harden the velvet is rubbed off on tree limbs and the elk change their behavior from calm and social to aggressive and combative. At this time the males contend for the right to a group of females. 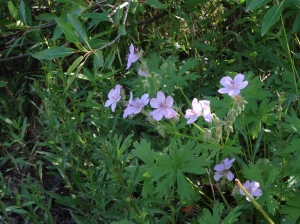 Besides the grasses the elk eat, they have a taste for wildflowers. Some of their favorites are dandelions, violets, clover, and asters. They also do the gourmet thing and eat mushrooms. 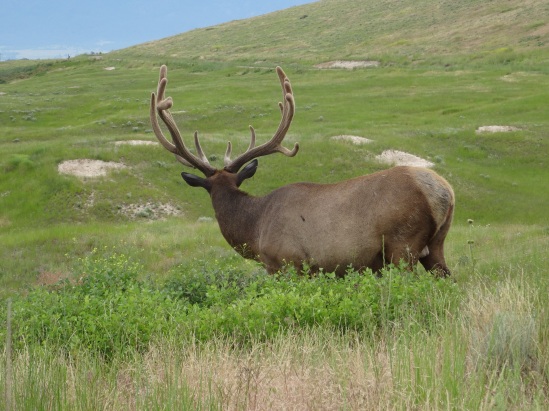 Generally elk live from 8-12 years though some have lived to 20 years.

A baby elk calf can stand up within 20 minutes of birth.

Bull elk have two canine teeth known as “Ivories”. These are often kept by hunters as trophies of the hunt.

There are several species of elk in the US and Canada.

One species is named after President Theodore Roosevelt. He was the one to establish this National Bison Wildlife Refuge back in 1908. It is one of the oldest of the National Parks in the US.

Elk have quite a vocabulary of sounds. The males are known for their bugling during the rut. They also have various whistles and grunts and squeals which have various meanings to the herd around. Babies will send out an alarm to mothers if they feel threatened. You don’t want to threaten a baby elk! Mothers are very protective.

The species of elk in these pictures are Cervus elaphus.

The meat of elk tastes a lot like beef. It has a mild flavor. I had a meatloaf at Quinn’s Hotsprings after our day of watching bison and elk. The meatloaf was a combination of buffalo (bison), elk, and beef. It was quite tasty. 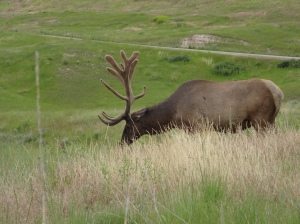 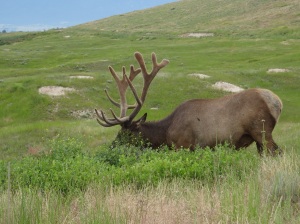 As I travel and observe the creatures God created for us to enjoy, I am constantly amazed at their unique design. Each creature was given all that it would need to survive in its habitat. Some can live where others can not. Others live in harmony with surrounding animals and plants. Their diets are different so that all have enough food to survive. Each animal variety serves an important part in the ecosystems of its surroundings. I can’t believe this all happened by chance. It clearly indicates a Divine Creator who had a plan. He also has a plan for your life.

One thought on “Elk, The Largest Deer Species in the World”