What a find! I found four Great Horned Owls sitting in the loafing shed at the ranch in Kuna, Idaho while on vacation this summer. Three of the four were babies. These majestic birds are fun to watch and they “talk” to you at night time. In addition to the United States, these owls also range into Canada and sections of South America.

I’ve Got My Eyes On You!

One of the most distinctive characteristics of these birds is their large yellow eyes. these have been designed by our Creator to see well in the dark. These birds also have the ability to direct their gaze by swiveling their heads almost clear around. You will also notice their ear tufts from which they get their name.

One stayed behind when the others flew the away.

When God created these birds He gave them the ability to adapt to changing environments. They are a very successful species that can be found practically all over the US in a wide variety of habitats. The ones photographed here are very helpful in controlling  rodents, rabbits, birds, and other creatures around the farm.

Known By Other Names:

The Great Horned Owls have also been called “Hoot Owls”. They also go by the name “Tiger Owls” because of their coloration and predatory habits. Their most specific name is their scientific name Bubo virginianus.

Carnivores With a Wide Range of Diets:

The Great Horned owls have a varied diet. They are real “Meat-Lovers”. Some of the creatures eaten include: rats, mice, voles, rabbits, small birds, reptiles, frogs, and on occasion, they even have eaten fish. One of the most interesting food stuffs they eat, however, is skunk. There are not many predators that will eat these smelly creatures. They also eat opossum, and other mammals. With such a wide range of food sources they easily adapt to new territories.

Because of their coloration they can easily hide out during the day time and often perch high and watch the territory below to strike prey that move within their territory. They often fly from roost to roost watching the area below.  Most of their hunting is at night but they have also been known to take prey in the day time when the opportunity for a quick meal is present. (The optimum time to view them hunting is between 8:30 PM  to 12:00 AM.) Because of their sound dampening feathers they can approach prey with nearly a sound. When the prey recognizes it has been had, it’s too late. They can apply a great deal of pressure with their long claws which often puncture the prey on contact. They generally eat their prey whole unless it is too big to get down their gullet. In such cases the owls use their beaks to tear their prey into pieces.

Great Horned Owls tend to be “stay at home” creatures. Once a territory is established they usually remain there year round for their entire life span. An average life span for a Great Horned Owl is about 13 years but they have been known to live to the ripe old age of 29 on occasion.

Beware of Your Enemies!:

Great Horned owls are most vulnerable when they are young. Many creatures like to feed on the eggs and fledglings when located by predators when parents are away. Some creatures that eat owls are coyotes, raccoon, the American black bear, opossum, feral cats, bobcats, and foxes. Crows and Ravens like to torment roosting owls by gathering in large groups and surrounding them and making a lot of noise trying to run them away, since they compete for food resources in the territory surrounding their nesting sites.

Watch What You Eat!

Some owls bite off more than they can handle. A few owls have died being pierced by porcupine quills or killed by the very prey they are trying to subdue. One has to count the cost before engaging some creatures.

Humans Are The Greatest Danger!

Most owl deaths, however, are caused by man-made items like: power lines, barbed wire, and collisions with automobiles. When I lived in Lake County, California, a large Great Horned Owl ran into the power line right outside of my house and I took it to school to give to one of the parents of my students who was a game warden. It is illegal to possess and owl without a special permit for the Department of Fish and Game. The one I delivered was sent to the Warm Springs Dam for mounting and use in their nature center.

Once Thought a Threat, Now a Helper:

At one time many owls were killed by persons who raised chickens and other fowl because they often preyed on their livestock. However, most farmers today, consider the Great Horned Owls a friend desirable to have around your farm and home. They are really helpful in controlling the destructive rodent populations that devour crops and carry diseases. Great Horned Owls are protected and it is illegal to hunt them today.

Have You Ever Dissected an Owl Pellet?

One of the most interesting projects that you can do is to dissect an owl pellet. When you first see one it looks like poop, but it actually comes out of the owl at the other end. These hairy balls of fur and bones contain the parts of the animals eaten that could not be digested. One of my students once found the remains of four mice in just one pellet. 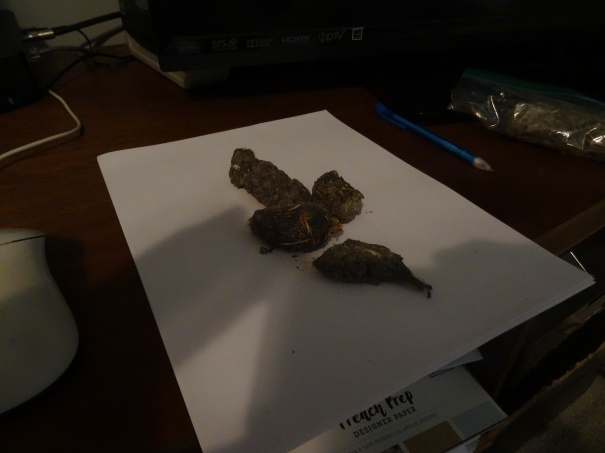 The Owl Pellets Above Were Found Under The Roost In The Loafing Shed.

Some people actually make money collecting owl pellets and selling them to schools. They are usually wrapped up in tin foil and baked in an oven to kill any harmful microbes or insects that might be in the pellets. We often use toothpicks and tweezers to tear the balls apart and set out all the bones we find inside. Many scientists study these in order to see what the owls are eating and how many creatures they eat in a given time.

Listen Up And Keep Your Eyes Open:

If you want to see if any of these creatures live in your area you can listen at night for their characteristic hoots or just look in the trees and inside barns and other roosting places in the daytime . A dead give away is to look under roosting trees for their pellets. You will often find them high in the trees overhead resting during the daylight hours. One of the best places to look is along a tree lined river pathway. A good pair of binoculars will help you  get a closer look if they are a distance away from your viewpoint. Take a camera with a zoom lens and you can blow up the image to see more details. If you go on-line or visit your public library, you can learn a lot more about these important creatures. Thank God for His creation and take time to take a closer look around you. There is a lot to learn and enjoy.