Do You Know Me?

One of the most well known birds, recognized in photographs, is the Bald Eagle. These interesting birds have been studied for hundreds of years while uncovering many of their habits and characteristics. 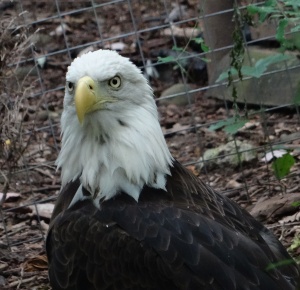 If you look closely you will notice that these eagles are chocolate brown in coloration. The adults have white heads and tails. You will also notice the yellow eyes, beaks and legs. Notice the powerful hooked bill which is designed for tearing meat apart and can also be used as a weapon.

Though these birds are very large, they are only the second largest in the U.S.  Can you name the largest? It is the rare California Condor. Have you ever heard of the Bergman’s Rule? This general rule relating to the size of Eagles predicts that the farther North you go, the larger the birds will be. It seems to stand true when comparing specimens from the North compared to those found father to the South. The larger females range from 35-27 inches long with a wingspan of 79-90 inches. That is a big bird! The smaller males are between 30-34 inches long and have a wingspan of 72-85 inches. That makes the females 25% larger than the males. 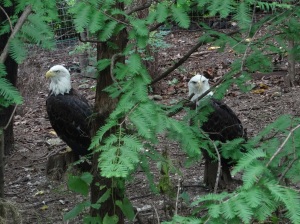 Are They Really Bald?

Strange as it may seem, the eagles are not bald as one would think. The term “Bald” actually doesn’t come from a word meaning “without hair“. It actually  comes from a word that means, “White Headed“. Interestingly, they do not acquire their white heads and tails until they reach maturity around 4-5 years of age.

Controversy Over Naming the Bald Eagle As National Symbol:

If you look at the Presidential Seal, and on many U.S. coins, you will find the Bald Eagle as a national symbol of the U.S.  This has been the case ever since 1782 when it was declared the official emblem of our great country. Not all of those present at this time thought the Eagle was a good choice. One notable exception was Benjamin Franklin, who thought the Eagle’s reputation and character was far beneath the dignity of the U.S.   He noted that they were cowardly and of low moral character since they often steal food captured by other predators and will flee from the little  King Bird when being chased by them.

It Takes a Thief: “Kleptoparasitism”

Bald Eagles are often seen swooping down and stealing the prey from Osprey, foxes and other smaller predators. Have you ever heard the term “kleptomaniac” used to describe one who compulsively steals from others? Well, scientists use a similar word to describe animals like the Eagles that steal the food from others. This term is “Kleptoparasitism“.

Did you know, that in addition to stealing food from others they also eat dead things found along the road or in the field or beside the streams. This is known as “Carrion”. In many places and when the opportunity arises the large portion of the eagle’s diet comes from these sources.

They do, however, take wing and work for some of their food. It seems their favorites come from the ocean or fresh water. If you have ever watched an eagle for very long you may have seen it swoop down and snag a fish from the water with its talons. They then fly to a nearby nest, rock or tree top to tear the food apart for storage. They store it up in a large crop at the bottom of their necks until they further process and digest it later. Sometimes eagles go for several days without hunting, processing the food they captured earlier. They are known to feed on many different types of animals being opportunistic hunters. Some of these include: ducks, coots, auklets and other small birds. They also eat rabbits, raccoon, muskrats, skunks, opossum, armadillos, arctic foxes, baby beavers, and even baby seals when available. They augment their diet with shellfish, turtles, crabs, and small birds.

The scientific name of the Bald Eagle is “Haliaeetus leucocephalas”. The Genus and Species names are written in Latin. They mean “Large Sea Eagle with a white head“. Scientists use this universal language for all their classification of living things. Apparently this name came from Linnaeus clear back in 1766. 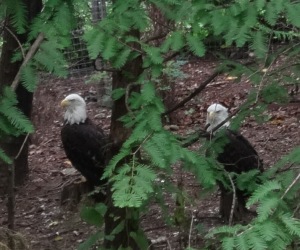 One of the most outstanding characteristics of the eagles is their ability to construct huge nests. One of these was calculated as being almost two tons in weight and was 20 feet deep in the middle.. Another nest was  measured at 9.5 feet across. These are built high above the ground often on tree tops. We saw one high in a tree when we visited Yellowstone National Park several years ago. Nests more often are about 4-5 feet in diameter. Since the nests are reused for several years they get bigger as the years go by when new building materials are added to the original. Eagles often use man-made telephone poles and radio towers as places to build their nests. 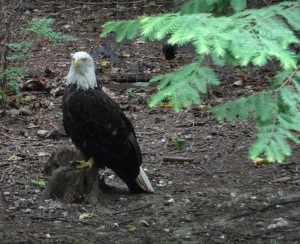 One of the sad historical events associated with the Bald Eagles was when they were dying out and threatened with extinction. This was primarily due to the introduction of the deadly pesticide, DDT. When this pesticide was used it eventually got into the food chain. The poison caused damage in egg shell formation and when the eggs were laid they broke before the chicks could develop. This not only hurt the eagles but many other animals in the environment. The government declared its use illegal and it has taken several years for its effects to be removed from the environment. In 1940 Congress passed  the Bald Eagle Protection Act. Since the poison also threatened other birds of prey, in 1962 an amendment added the Golden Eagle to the mix. In 1963 there were only estimated to be 487 nesting pairs of Bald Eagles. Much regulation and active protection helped the bird’s numbers to recover. In 2007 the Bald Eagle was finally removed from the list of threatened and endangered species. 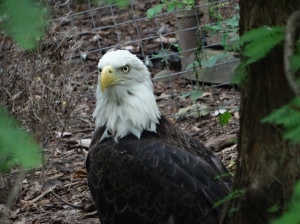 It’s Our Duty to Care for Them:

Though these birds have recovered, it is important to realize how careful mankind must be in how we treat the environment. God gave man the Dominion Mandate way back in the Book of Genesis. He gave man the responsibility to care for His Creation. It was created for man to use but not abuse.

Many of the Native American tribes have considered Eagles sacred birds for thousands of years. Today true Native American tribes can still harvest the feathers of these birds which are illegal to possess by others. They use them in many of their religious ceremonies and include them in their clothing and head wear. If you have ever seen a picture of an Indian Chief you have probably noticed the large feathers in his headpiece. The feathers were also waved through smoke while brokering agreements and treaties with others.

Why Not Learn More?:

Much of this information came from reading books and blog posts including National Geographic Field Guide to Birds of North America and web sites, Smithsonian Institutes National Zoo, Wikipedia, and U.S. Fish and Wildlife Service Blog.  There are many more that you can easily find by looking on line.

Note: The pictures I took of these birds were from Queens, N.Y. at the Zoo there. The eagles on display had been brought to the zoo injured and after they recovered were unable to be released to the wild since their wings were damaged.

3 thoughts on “Bald Eagles: Symbol of the United States of America”