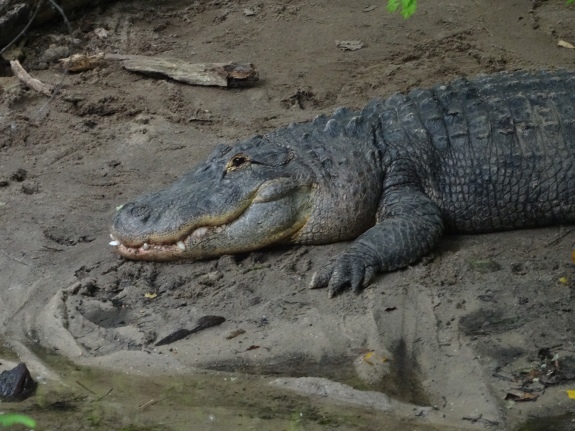 You have probably heard the expression. “See you later, Alligator.” Believe it or not, it almost became true of these amazing creatures. Back in 1973, due to over harvesting and wanton killing,  these historic American reptiles were threatened by extinction and placed on the Endangered Species list. What a shame it would have been to lose these interesting creatures from their natural habitats. As a result of careful management, they have made an amazing comeback and were removed from that list in 1987. They are still carefully managed, but have come back in impressive numbers.

What’s On the Menu?: 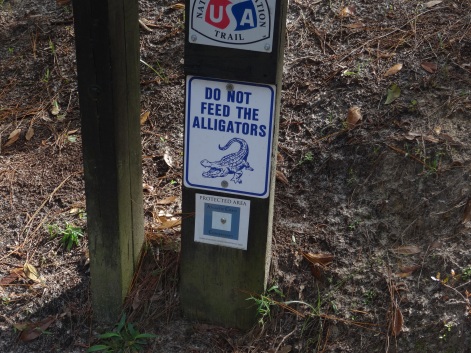 We found this warning sign while observing birds around a lake in Alabama.

After viewing these creatures you develop a great respect for their powerful jaws. It’s interesting to note, however, that it usually isn’t people that are eaten by alligators. Rather, it is people eating alligators. Their meat is highly sought after and cooked in many interesting ways. Besides their meat, one of the reasons for their reduction in numbers was their skins. Many items used to be made from their hides. They also got a bad rap! Many movies and books portrayed these animals as a great threat to mankind. Though they are to be respected, they rarely threaten humans unless they are approaching them in their nesting areas. Most areas where viewing is provided have ample warning of their presence and suggest you watch where you go while watching them from a distance. You can also go to places where alligators are raised commercially and watch shows where they demonstrate their abilities to snap onto and devour their food. Alligator meat can be found on the menu of several restaurants that have been raised commercially for harvest. 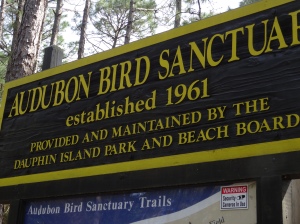 They Can Be Hard to Spot!:

Can you see me now?

Though alligators can hide well in vegetation, as above, they more commonly like to rest on the shoreline where they absorb the warmth of the sunshine on cold mornings. After they warm up, they may then crawl back into the water to cool down and look for food. Being reptiles, basking is a form of temperature regulation.

My, What Big Teeth You Have!

Just like in humans, the teeth of the alligators change as they mature. When very young,  they have needle-like teeth well adapted for capturing insects and other arthropods as well as young fish and crustaceans. As they grown older, their teeth also enlarge. With these big teeth they can crack open even hard-shelled turtles and break bones of other animals. Their jaw force is amazing. Interestingly, the force of their jaws is greatly minimized by placing a hand or a band of duct tape around their snouts, which is often the tactic used when subduing these animals in zoos and in the field when the trapper plans to release the animals after collecting data on their length, health, age, and other factors. Once the tape is removed, you better watch out! When they clamp down they have one of the greatest bite forces in the Animal Kingdom.

One unique feature of alligators is their habit of capturing their prey on shore and dragging it into the water to drown it. Once it is dead, they grab on to part of the body and do an “Alligator Roll” which twists off pieces of the animal for more easy swallowing. They have even been known to work in groups to tear apart larger animals with each getting their share of the food. Since they really don’t actually chew their food they have been equipped with gizzards, just like the birds. In these organs they can grind down the meat and derive the energy in this food through further digestion. I consider all these amazing traits as a sign of their unique design by a thoughtful Creator.

Of the many members of the animal kingdom that have been observed using tools, the alligator is included. This is highly unusual in the ranks of reptiles! “What tools do they use?”, you might ask. Well, they have literally figured out a way to really “Stick It to” their prey. They have been observed holding branches of trees in their mouths while waiting for unsuspecting birds to descend and lite on the branches offered as perches.   When the birds land they are surprised when the large mouth opens and clamps down on their bodies: I guess this is the Fast Food of the alligator’s life. 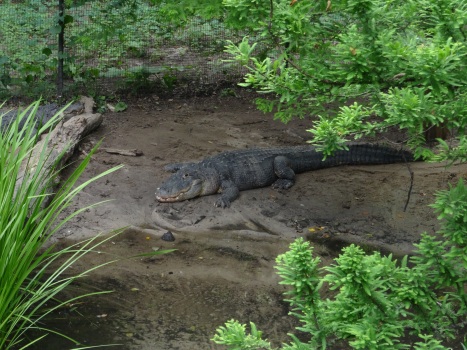 Interesting studies of alligator’s stomach contents have revealed that they are not totally carnivores. Though, to my knowledge this has never been witnessed by man, within the stomachs there have been elderberries, wild grapes, and citrus fruits taken directly from trees. This again, shows the great adaptability of these creatures to use the food available. Their diets are very diversified.

Infrasonic Communication: “B Flat”, Now That’s Music to My Ears!

Like other animals alligators have some interesting ways to communicate with others of their own kind. The males can create bellowing sounds by sucking air into their lungs and then emitting it quickly. This seems to be a way to warn off other males invading the mating territories where the females are during the mating season. Those who have observed these sounds say that they are more felt than heard. They even create vibrations in the water around the gators when they are emitting them. The sprinkling effect is even called the “Water Dance” by those who have witnessed these things. In one experiment, tubas were used to stimulate the large males into producing their own vibrations. When checked with the musical scale, the vibrations register a B Flat on the scale. Baby alligators also vocalize with a chirp-like sound to let their mothers know when they are ready to emerge from their eggs buried in the vegetation by their mothers for incubation. The mothers then dig up the babies and watch over them for some time until they are ready to fend for themselves in the wild.

Who Is The Hottest?

If you have ever wondered who is the hottest between males and females, it’s the males. At least in the Alligator world. You see, the temperature during the incubation period has a direct effect on the gender of the babies. At 93 degrees F. you will have males. At 86 degrees F, you will have females.

Alligators have an important role in the environment by regulating the populations of the creatures living there. If there are too many of some species there will not be enough food to go around. Besides the native species that over produce, non-native species create an even greater danger. Man has messed up this critical balance frequently by bringing in unwanted non-native species. One of these creatures, the Nutria, was brought into the U.S. from South America back in the mid- 20th century. They quickly multiplied and became a nuisance species burrowing into the banks of levees causing floods and eating up the food that the other species depended upon for survival. Give a shout out to the alligators! It seems that the alligator is one of the most important factors in regulating these animals. Another group of terrible invaders are the Burmese Pythons that have been released into Florida by some who found their newly acquired pets were getting too large to manage. Soon, pythons were taking over the environment. Alligators seem to have a taste for these creatures as well.

Every Creature Is Important!

One of the things man has learned over the many years of observation is that every kind of animal is important in the balance of the ecosystem. When God created all things He had a purpose for each one. It is important as Earth’s Caretakers, to realize how it is important that we acknowledge this balance and work to maintain it for the preservation of the species. This requires careful observation and management by taking time to consider the ramifications of our activities in the natural world.

Alligators can weigh over 1000 lbs.

Alligators live in the South-Eastern part of the U.S.

The scientific name of the American Alligator is Alligator mississippienis.

Alligators have a third eyelid that covers their eyes underwater like built in “diving masks”.

Alligator teeth are aligned so that the upper teeth fit into the bottom ones for a tight grip.

Baby alligators have an “egg tooth” located on the tip of their noses to use to get out of their eggs when fully developed.

Strangely, alligators have 5 toes on each of the front feet while only 4 on the rear ones.

Scientists believe that alligators live up to 35-50 years in the wild. In captivity they are known to live  from 60–80 years.

Alligator meat really does taste a lot like chicken.

Why Not Do Some Further Research?:

It’s not hard to find a lot more information by simply doing a Google search on-line. Check it out!