Recently we spent some time in the Zoo in Queens, New York. Among  the interesting creatures we saw there were the Andean, AKA: “Spectacled Bears”. These animals are the only bear species found in South America. They are the only remaining species of the group of bears to which they belong, the Tremarctos Bears. There used to be a species in Florida but it has been extinct for a long time.

If you look at the picture above you might be able to see why they are called “Spectacled Bears“. The white markings around their eyes make it look like they are wearing large glasses.

These bears also go by another name, the Mountain Bears of the Andes. This is because these bears prefer the high jungle mountains of South America. They are found living between 6,000 and 8,800 ft. Now that’s the “high road”.

Though these bears are generally much smaller than their Northern counterparts they are remarkable creatures. Their range includes many parts of South America including: Western Venezuela, Columbia, Ecuador, Peru, Western Bolivia, and North Western Argentina.

Because these bears are often hunted for their body parts, there are suspected to be only about 18,000 left. The bears are killed by poachers and the body parts are sold for folk medicine and religious rites. Many steps are being taken to reduce poaching and provide protection for this species.

One of the strange things about these bears is that their diet is primarily made up of plant foods like berries, grasses, bromeliads, bulbs, and fruits. Only 5% of their diet is meat. The animals they eat include small rodents, rabbits, and birds. It is noteworthy to see that they are the most vegetarian of all bears.

Stay Away From My Babies!

For the most part these bears pose very little threat to man unless the mother is with her young. She will take on pretty much anything that threatens the safety of her young. We saw a mother bear watching over her young at the Zoo there in Queens, NY. The young animals seemed very curious and playful but were always under the watchful eye of their mother.

Designed with a Purpose:

As I discover new species and observe the diversity of Creation I am thrilled to see just how important each creature is to the whole of the environment. When God created these as well as all the other animals and plant species He had a specific role for each to play. The food webs and balances in the environment are healthy when all the species are allowed to do their part. When man over harvests the environmental resources there is always a consequence. It is important for us to consider our role in the preservation of the species.

If you ever get the opportunity to travel to New York I highly recommend that you include a stop at the Zoo in Queens. You will not only get to see these bears but many other interesting creatures. You can also watch videos of them on-line and read all about them by doing a Google search. Most of this information was available at the Zoo and on their web site. Other good sources are the Smithsonian and National Geographic web pages. Why not take a look? 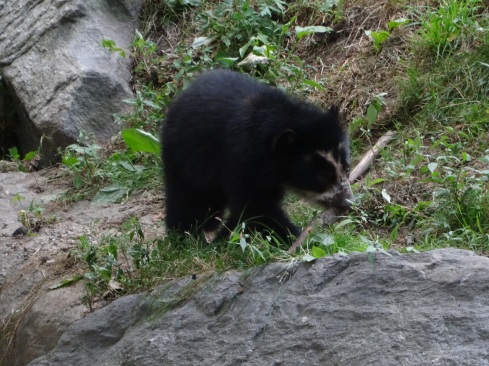